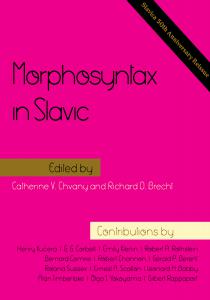 These books are a series of reprints of notable titles published by Slavica and long out of print. We are restoring these titles to print and making them available as free downloads from our website, slavica.indiana.edu, in honor of Slavica’s fiftieth anniversary in 2016. Yes, we are officially middle-­‐‑aged. Founded by four graduate students at Harvard in 1966, Slavica published its first book in 1968, Studies Presented to Professor Roman Jakobson by His Students. To celebrate Slavica’s jubilee, we are releasing in .pdf format, no strings attached, scans of twelve out-­‐‑of-­‐‑print titles. Enjoy these books, tell your friends, and feel free to share them with colleagues and students.

Case in Slavic was the third and final monumental collection of articles on Slavic morphosyntax published by Slavica. This is more overtly theoretical than the earlier volumes, albeit reflecting a democratic range of theories. Exploring these three anthologies along with the quinquennial volumes of American Contributions to the International Congress of Slavists, not coincidentally also published by Slavica since 1978,...

Issues in Russian Morphosyntax was the second of Slavica’s three noteworthy collections of articles on Slavic syntax.  In his introduction to this reissue, Slavica director George Fowler writes that this title contains a number of rich articles that were essential in the formation of his morphosyntactic mirovozrenie.

Slavica would like to express its sincere thanks to Michael Flier and Richard...

Morphosyntax in Slavic was the first of three major collections of articles on Slavic morphosyntax which helped define the research agendas of Slavic linguists during the period when syntactic theory was becoming more highly constrained and therefore more complex than it had been during the first two decades of Chomskyan theory. Even today they are splendid examples of linguistic argumentation...

Agreement in Contemporary Standard Russian was a tremendous book for its time. It provides a host of sensible descriptive generalizations about difficult cases of agreement for gender and number, and the statistical surveys that have been published in Russia and the Soviet Union in more recent years generally confirm the validity of Crockett’s earlier, more intuitive generalizations.

The Gods of the Ancient Slavs

Gods of the Ancient Slavs when it was published provided a valuable and comprehensive review of the literature on Slavic mythology, with extensive notes and bibliography, making it a superlative springboard for further research and interpretation in this interdisciplinary crossroads of Slavic history and philology. In granting permission to post this scanned version of the text, the author expressed the...