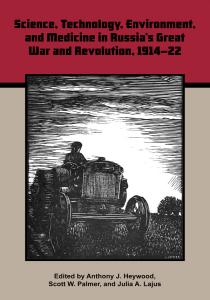 For most of the twentieth century Russia’s Great War of 1914-18 was a historical afterthought. Overshadowed by the Bolsheviks’ revolution, the Civil War, and the consolidation of Soviet power, the First World War suffered from relative neglect within professional scholarship, as Soviet and Western experts alike focused their energy on explaining either the decline and fall of the autocracy or the origins and rise of Russian Communism.

Since the early 1990s, however, researchers in Russia and elsewhere have started to re-examine and re-evaluate the war’s significance and meaning in the history of that state and society. Encouraged by the opening of access to the Russian archives and freed from the ideological baggage of earlier historical debates, they have begun to investigate and reassess Russia’s Great War not simply as a prelude to “Red October,” but in its own right. Increasingly, the war is seen as the fulcrum which set into motion a chain of events that transformed Eurasia and much of the world. Instead of treating “1917” as a watershed moment in Russian and global history, many scholars now perceive a "continuum of crisis" between 1914 and the early 1920s.

In the years preceding the one-hundredth anniversary of the First World War interest in Russia’s involvement became much more engaged not just among scholars, but also in public discussions among Russian leaders and citizens. The centennial of the war’s outbreak also challenged historians of Russia to raise public awareness of Russia's contributions to the Great War and of the war’s impacts on Russia. In response, Slavica’s series “Russia's Great War and Revolution” was conceived in 2006 as a long-term project to promote and disseminate such research. With over 250 contributing authors from across the globe and a projected total of 11 volumes with 20 individual books, it has become unquestionably the biggest multinational scholarly effort to mark the War’s centennial in relation to Russia. It seeks to provide readers of English with a broader understanding of the war’s place in Russian history and, as important, the place of Russia’s involvement in the history of the Great War and its consequences.

This book--one of two covering the Russian Civil War in a volume on military affairs during Russia’s Great War and Revolution--explores the military history of the Russian Civil War. Drawing heavily on research from Russian historians but including an international slate of authors, it traces...

This book—the first part of an entire volume about military affairs in Russia’s Great War and Revolution—is based on the premise that the military history of World War I in the Russian theater and the subsequent Civil War cannot be sufficiently understood by focusing exclusively on descriptions...

This volume features new research on the critical effects of World War I and the Russian Revolution and Civil War in Northeast Asia, a broad region that has historically included the Russian Far East, Mongolia, China, Korea, and Japan. Drawing together noted international specialists, the...

For soldiers on the Great War’s Western Front the term home front suggested a degree of coziness, a place of retreat from the horrors of battle visualized by the poet Rupert Brooke in idyllic terms shortly before the war, a place where the “lilac is in bloom” and “is there honey still for tea?”...

For soldiers on the Great War’s Western Front the term home front suggested a degree of coziness, a place of retreat from the horrors of battle visualized by the poet Rupert Brooke in idyllic terms shortly before the war, a place where the “lilac is in bloom” and “is there honey still for tea?”...

This book presents original research by an international group of scholars on the social history of Russia across the period of World War I, the 1917 revolutions, and the Civil War. The essays document how the inhabitants of Russia’s multinational empire mobilized in 1914 in response to the...

This book presents a series of essays from leading international scholars that expand our understanding of the Russian Revolution through the detailed study of specific localities. Answering the important question of how locality affected the revolutionary experience, these essays provide...