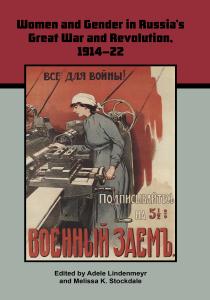 World War I, followed by four more years of revolution and civil conflict, exerted its power to both liberate and destroy in Russia on a scale unsurpassed elsewhere in Europe. It accelerated improvements in women’s status and employment opportunities, culminating with the gain of full political rights after the overthrow of the monarchy in February 1917. The Bolshevik Revolution in October 1917 ushered in a new leadership and political system that proclaimed sweeping economic and social equality for women as its goal, not mere “bourgeois” rights. At the same time, war and revolution subjected women and men to extreme violence and insecurity and upended gender expectations. Individual historians have investigated various problems in the history of women and gender in Russia during this period, but the field still lags behind the extensive historiography of gender and war in Europe.

This volume brings together scholars from Russia, Great Britain, and North America to examine women’s experiences and changing gender norms during Russia’s crisis years. Looking beyond rhetoric about women’s wartime service and ideological proclamations of emancipation, the authors seek to understand how years of military combat, political upheaval, and social transformation affected lives and redefined concepts of citizenship, patriotism, and gender. Since no one volume can encompass the vast scope and depth of these topics, the contributors hope that their work will encourage others to undertake research on women and gender in Russia’s Great War and Revolution.

Denis Davydov and Olga Kozlova, Emancipation “Soviet-style”: Changes in the Status of Rural Women, 1914–27 (Based on Materials from Kazan´ Province and the Tatar Republic)
https://doi.org/10.52500/KRLT2463

Boris I. Kolonitskii, Kerenskii as a “Woman”: The Delegitimization of a Politician in the Conditions of Revolution
https://doi.org/10.52500/FDTI2554

David Borgmeyer, The Art of Natal´ia Goncharova and the Great War: Modernism and Conflict in Russia
https://doi.org/10.52500/IXTA7019