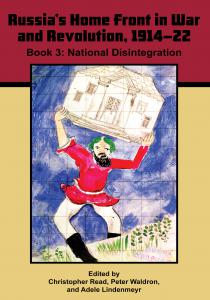 For soldiers on the Great War’s Western Front the term home front suggested a degree of coziness, a place of retreat from the horrors of battle visualized by the poet Rupert Brooke in idyllic terms shortly before the war, a place where the “lilac is in bloom” and “is there honey still for tea?” Russia was not overendowed with coziness even before the war, but the early defeats, extensive conscription, deepening economic crisis, and growing political instability meant the elimination of any traces and the replacement of coziness with food shortages, strikes, disturbances, and, in 1917, full-blown revolution. Then the situation became even worse. Catastrophe piled on catastrophe. Food shortages became famine. Economic crisis became collapse and, in 1918–20, flight from hellish cities like starving Petrograd. Political struggles became civil war. Terrible antisemitic pogroms occurred. The multiple crises engendered cholera, typhus, and influenza which ravaged malnourished bodies. On top of the war dead some ten million died in the Civil War, mainly from illnesses. The 34 contributions to the RGWR Home Front Books 3 and 4 shine a piercing light on these events. From broad accounts of the demographic consequences to detailed studies of particular aspects, the chapters in these two books take us to the cutting edge of contemporary scholarship on these issues. Book 3 focuses on the descent into chaos, while Book 4 centers on its consequences and the first steps by the new authorities to establish a new form of order in Soviet Russia.