Volume 6: The Global Impacts of Russia’s Great War and Revolution: Book 1: The Arc of Revolution, 1917–24 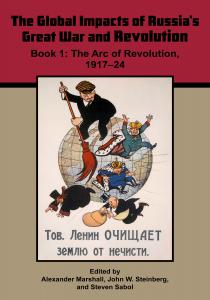 Karsten Brüggemann, Learning from Estonia Means Learning to Be Victorious? Estonia between the Legacy of the February Revolution and Nikolai Iudenich’s Northwestern Army
https://doi.org/10.52500/ESRT8537

Harald Jentsch, The Hamburg Uprising as Part of the “German October,” 1923

Vadim Mukhanov, From the Mountains to the Plains: Establishing Soviet Rule in Armenia and Azerbaijan (1920)
https://doi.org/10.52500/IMKM8423

Steven Sabol, Revolution and Civil War in the Steppe: Alash Orda and the Struggle for Kazakh Independence
https://doi.org/10.52500/ABCI8177