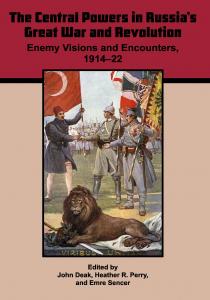 This volume brings together the work of researchers in North America, Central and Eastern Europe, and Turkey, who are generating important, archivally based scholarship in their respective fields, languages, and nations of study. The larger goal of this volume is to sit in conversation with the others in this series that directly deal with Russia and its Great War and Revolution. Therefore, the volume provides an entry point for scholars who need a quick assessment of recent historiographic perspectives from the “other side of the hill.” The aim is to introduce readers to the myriad ways that the populations of the Central Powers nations both perceived and encountered Russia’s Great War and Revolution. The volume has been organized around four key areas in order to give the reader a glimpse into new lines of research on the war experience of the Central Powers. The first section looks at the ways in which Russia appeared in the eyes of others. The Central Powers went to war against Russia with their own preconceived notions. How those notions changed when put in the pressure cooker of violence, invasion, and occupation forms a crucial point for understanding Russia in the imagination of the people and elites in Germany, Austria-Hungary, and the Ottoman Empire. The war also brought peoples into direct contact. The second section examines the variety of borderland encounters: positive, negative, and ambiguous. Ethnic violence and atrocity is certainly one aspect of those encounters which needs telling. But the war also opened up new spaces for economic exploitation and fraternization that colored and shaped the experiences of the soldiers and civilians. Section 3 focuses on the big-picture mechanics of strategy and policy. Armies in this new era of warfare increasingly functioned as administrators—of occupation regimes, veteran programs, and as quartermasters of the entire war economy. The chapters here explore the facets of military policy toward the end of the formal fighting in the war. And finally, the fourth section speaks to the transformation of the war in the East and its legacy for the continuum of violence that succeeded formal hostilities.

Yiğit Akın, “The Greatest Enemy of the Ottomans and Muslims”: The Russians in Ottoman Propaganda during the First World War
https://doi.org/10.52500/VQDG4021

Yücel Yanıkdağ, Flirting with the Enemy: Ottoman Prisoners of War and Russian Women during the Great War
https://doi.org/10.52500/YRAO5709

Peter Lieb, German Politics in the East between Brest-Litovsk and Versailles
https://doi.org/10.52500/ZAJC4248

Robert L. Nelson and Justin Fantauzzo, Soldiers as Settlers in East Central Europe during and in the Wake of the Great War
https://doi.org/10.52500/RTJW4131

Verena Moritz and Hannes Leidinger, The Influence of the Russian Revolutions on the POWs in Austria-Hungary and Russia
https://doi.org/10.52500/OIVG4816