"The Bolshevik Revolution Had Descended on Me": Madeleine Z. Doty's Russian Revolution 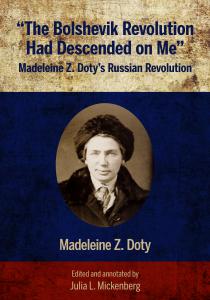 In 1917—that is, in the midst of the First World War—Madeleine Z. Doty, a feminist, lawyer, prison reformer, peace activist, and journalist, was commissioned by the magazine Good Housekeeping to travel “around the world” to get a view “behind the battle line” of how people on the home front, especially women, were responding to the war. Traveling on the Trans-Siberian Railway from China, Doty crossed the border into Russia just days after the Bolshevik Revolution had begun. She meant it literally when she declared in her account of these travels, Behind the Battle Line: Around the World in 1918: “The Bolshevik Revolution had descended on me.”

Having found herself serendipitously arriving in St. Petersburg (then called Petrograd) as history was being made, Doty made plans to extend her visit, staying in Russia for four months, and documenting the revolution as it unfolded, as well as particular elements of life in revolutionary Russia that interested her, such as the justice and penal system and women’s leadership. She also offered a strikingly textured portrait of Russian-German peace negotiations at Brest-Litovsk. When Behind the Battle Line was published, critics noted that the Russian chapters are richest, but combined as they are with discussion of Japan, Korea, Norway, France, Sweden, China, and England, Doty’s account of the Bolshevik Revolution has not gotten the attention it deserves. This book offers Doty’s writings on Russia and the Bolshevik Revolution as a stand-alone volume (supplemented with explanatory footnotes) along with an introduction providing background on Doty herself and the milieu of suffragists, reformers, professionals, and journalists in New York City, of which she was an important part.