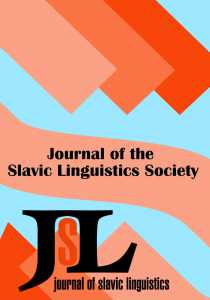 Maria Babyonyshev
The Possessive Construction in Russian: A Crosslinguistic Perspective     193

Frank Y. Gladney
On the Syllabification of High Vowels in Late Common Slavic     235

The Possessive Construction in Russian: A Crosslinguistic Perspective

Abstract: The paper examines the syntactic and semantic properties of the Russian prenominal possessive construction. Evidence is offered for an analysis in which the possessive is inserted into the derivation as a nominal (not an adjective), and the "possessive form" is created when the N° undergoes head-movement in overt syntax and (eventually) adjoins to the possessive D°. It is shown that within such an analysis a number of semantic and lexical peculiarities of the construction are explained and, moreover, that they closely resemble the properties of N-to-D raising recently discussed for Romance languages in Longobardi 1994, 1996.

On the Syllabification of High Vowels in Late Common Slavic

Abstract: Surface and intermediate [j] and [w] in Late Common Slavic are phonetic realizations of /i/ and /u/ as determined by the rules of syllabification, although in some cases syllabification is governed by the lexical specifications of individual morphemes rather than by their phonetic properties.

Abstract: In most Slavic literary languages prefixed perfective verbs have one corresponding derived imperfective built with one of the two historical imperfectivizing suffixes: -a+ and -ova+. Macedonian, however, derives two imperfectives for many prefixed perfective verbs and in many cases there is a substantial difference in meaning between these competing forms. This paper argues that a new grammatical category, concrete accomplishment, is responsible for such differences. In conclusion, historical causes are suggested for the development of this phenomenon, as well as predictions concerning its future.

Abstract: Bulgarian preverbal focus involves overt movement to scope positions within TP or CP. In the framework of checking theory, this paper argues that the two strategies of focus movement follow from [focus] merging in T (when [focus] is abstract) or in C (when [focus] is morphological). Ensuing double feature checking on T or C leads to TP/CP configurations with multiple specifier structures. The distribution of [focus] on functional heads in structures with multiple specifiers accounts for crosslinguistic variation (e.g., exclusion of clefts, ban on wh-in-situ, multiple wh-movement). These facts support the hypothesis that [focus] acquires formal status and becomes visible for computation only in conjunction with the formal features [tense] and [wh].

Non-First as a Default Clitic Position

Abstract: The paper discusses the two cliticization strategies of the clitics in Macedonian tensed clauses: procliticization and encliticization. It is argued that, whenever a [+V, -N] host is available, the clitics are both syntactically and phonologically oriented towards that host­they are true verbal clitics, which form an extended local domain with the verb, to the extent that, when the verb moves, the clitics go with it as free riders. Otherwise, the clitics are oriented towards the head of the clause, but share a restriction with second-position clitics­like the latter, they cannot appear in clause-initial position. The second strategy is actually a default strategy, resorted to when a [+V, -N] host is not available. Accordingly, in Macedonian, the non-first position is a default clitic position.