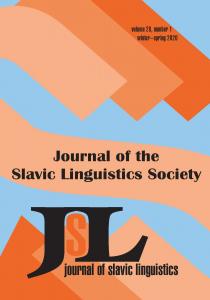 Dorota Klimek-Jankowska and Joanna Błaszczak
How Incremental is the Processing of Perfective and
Imperfective Aspect in Polish? An Exploratory
Event-Related Potential Study 23

Ronald I. Kim
Roman Jakobson. Remarks on the phonological evolution of Russian in comparison with the other Slavic languages. 81

Małgorzata E. Ćavar and Steven M. Lulich
Abstract: This article presents new data on allophonic variation of the Polish vowel commonly transcribed as /ɨ/ and frequently analyzed as phonologically back (e.g., Rubach 1984; Gussmann 2007). The new data were collected using 3D ultrasound im- ages from ten native speakers of Polish. While vowels in the context of labial and den- tal stops do not differ significantly, being articulated with a high front position of the tongue in both environments, the /ɨ/ assimilates to preceding velar stop consonants and is produced with relatively more raising of the tongue body and with a constric- tion extending further back. This is to be expected if /ɨ/ is taken to be a front vowel that assimilates to a [+back] consonant. This finding has potential consequences for the analysis of palatalization in Polish.

Dorota Klimek-Jankowska and Joanna Błaszczak
Abstract: The present paper reports two ERP experiments in Polish that examined the processing of mismatches between perfective and imperfective verbs and temporal modifiers, which preceded the VP (Experiment 1) and followed it (Experiment 2). The mismatch between perfective verb and a preceding durative adverbial elicited an N400 on the object. No ERP effect was found for the analogous mismatch between imperfective verbs and a preceding time-span adverbial. The mismatching temporal adverbial elicited an early positivity (potentially an early P600) when it followed a per- fective VP and a LAN when it followed an imperfective VP. The results suggest that: (i) the domain of aspectual interpretation in Polish is a VP; (ii) mismatches with perfec- tive and imperfective verbs are resolved differently depending on the degree of their semantic specificity (only semantically underspecified imperfective verbs can be eas- ily adjusted to the requirements of the preceding context); (iii) the position of the tem- poral adverbial plays a role in that a preverbal adverbial sets up a frame within which the eventuality should be interpreted and the aspectual value computed on AspP can be potentially adjusted to it (semantic integration reflected in N400), whereas a post- verbal adverbial must agree with the aspectual value already computed on AspP (syn- tactic integration reflected in an early positivity or a LAN).