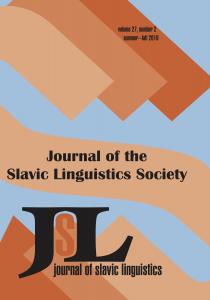 Frank Y. Gladney
On the Morphosyntax of Russian Verbal Aspect 137

Maria Gouskova
Phonological Words in the Syntax and in the Lexicon: A Study of Russian Prepositions 161

Frank Y. Gladney
Aspect is a syntactic feature of the sentence predicate, the Infl head of which is generated +Pfv or –Pfv and +Past or –Past. Verb forms comply with these features or are Inflected for them. Prefix-verb compounds are not stored in the lexicon but are base-generated in the sentence. They provide the environment for the Secondary Imperfective Rule, which assigns the feature +Iter to V when it contains a prefix. This feature governs the introduction of themes between the verb root and the ending. The +Iter feature can also be generated with the verb independently of the SIR, thus yield-ing the so-called procedurals. With unprefixed verbs aspectual patterning is a matter of their form (thematization) and their meaning. Those that are grammatical in +Pfvpredicates are +Telic (have a telos or goal). This depends on their formal and semantic properties and ultimately on the intention of the speaker.