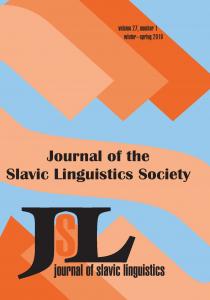 Ronald I. Kim
The long problematic correspondence of North Slavic -ě ~ South Slavic -ę in the jo-stem accusative plural and jā-stem genitive singular and nominative and accusative plural is best explained by positing a Proto-Slavic contrast within the soft jā-stems between gen. sg., nom. pl. -ē and acc. pl. -ę̄, which was leveled in different directions as NSl -ě and SSl -ę. With its nasal vowel, the acc. pl. ending must go back to -jāns, thereby demonstrating that the PIE eh2-stem desinence -eh2s > *-ās was remade to -āns after the other declensional classes in the early prehistory of Slavic. The Baltic facts are consistent with a Proto-Balto-Slavic date for this innovation.

Jasmina Milićević
Abstract: The paper describes the linear placement of Serbian clitics syntactically de-pending on an infinitive in the role of verbal, nominal, or adjectival complement (for short, infinitive clitics). Two linear placement options are in principle available for the infinitive clitics: local placement (in the second linear position [2P] of the infinitive phrase, where they form a cluster of their own) and clause-level placement (in the 2P of the clause, where they join clause-level clitics). Syntactic and prosodic condi-tions licensing these placement options are discussed and the corresponding clitic linearization rules proposed within a Meaning-Text dependency-based approach to syntax (Mel′čuk 1988, 2013; Polguère and Mel′čuk 2009). It is shown that clause-level placement of 2P clitics (unlike that of ad-verbal clitics of the Romance type) does not require the change of the syntactic governor of the clitics and should therefore be set apart from genuine clitic climbing. This is why the corresponding phenomenon is termed “clitic pseudo-climbing”..

Antonia Ordulj and Nikolina Sokolić
Abstract: Collocations in the Croatian language have been described in detail (Blagus Bartolec 2014). However, research on collocational competence in Croatian as a first or foreign language is still sparse. Previously, only the factors that influence the col-locational competence of Croatian native speakers (NSs) were investigated, showing that NSs have the best knowledge of collocations with high frequency and associative strength (Ordulj and Cvikić 2017). The most extensive research on collocational acqui-sition in Croatian as a foreign language (CFL) in heterogeneous groups was done by Ordulj (2017). This research showed that participants with lower proficiency had very poor collocational competence, while participants with higher proficiency showed an equal knowledge of noun collocations in the nominative case and in oblique cases. This paper aims to deepen previous findings and to examine productive knowledge of noun collocations based on their frequency, associative strength, morphological features, and the proficiency level of Polish students of Croatian. Collocations used in this research were collected from essays written by students of Croatian at B1 and B2 CEFR (2005) proficiency levels. The hrWaC corpus was used to count the frequency of collocations, and the associative strength of collocational constituents was assessed by native speakers of Croatian. The respondent sample comprised 27 students of Cro-atian in Krakow, Poland, who were divided into two proficiency level groups: lower (2nd and 3rd year of studies) and higher (4th and 5th year of studies). The influence of morphological features on collocational knowledge was tested with two fill-in-the-blank tasks containing collocations in the nominative and oblique cases. The analysis of productive tasks showed that morphological features do not influence collocational knowledge at the lower or higher proficiency level. In both cases participants pro-duced the best results in tasks with collocations of high frequency.

Marta Velnić
Abstract: This study investigates how givenness and animacy influence object order (IO-DO vs. DO-IO) in ditransitive constructions in Croatian child language. We have conducted an elicitation task with 59 monolingual Croatian children (mean age = 4;4) and 36 adult controls (mean age = 21), in which the participants were asked to describe images depicting ditransitive actions. These actions differed with regard to given-ness (DO given, or IO given) and animacy (IO animate, or both IO and DO animate). Both groups demonstrated an animacy effect, manifested as a significant increase of DO-IO productions when both objects were animate, compared to when only the IO was; adults presented DO-IO preference at ceiling level. Givenness had a statistically significant effect (p-value < 0.01) only in adults, but both groups were affected by the givenness of the DO. This paper supplies arguments to support previous indications that (1) DO-IO is the underlying order in Croatian ditransitives, and (2) that children do not have an IO-DO preference as has been reported by previous studies conducted on case-marking languages.