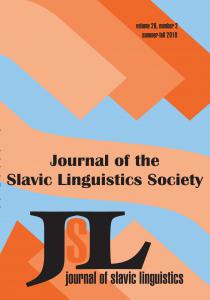 Gabrijela Buljan
The Croatian Suffix -stv(o): A Study of Meaning and Polysemy in Word Formation 185

Gabrijela Buljan
Abstract: This paper reports the results of an exploratory semantic analysis of Croa- tian suffixations in -stv(o). The suffix builds nouns which denote qualities, professions, states, collectivities, etc., and most suffixations take different interpretations in dif- ferent contexts. Our aim is to identify the suffix’s most type-frequent and productive meanings as well as typical patterns of polysemy in -stv(o) derivatives and their main motivating mechanisms. Assuming a usage-based Cognitive Grammar stance and Barcelona’s (2011) gradient view of metonymy, we examine an extensive corpus of suf- fixations and propose low-level generalizations, i.e., symbolic schemas that are shown to be variably frequent and productive. Although no single superschema can capture the extreme semantic variability of -stv(o) derivatives, we identify various local pat- terns of polysemy, which are predominantly motivated by metonymy.

Keith Langston
Abstract: The divergence of actual spoken usage from the prescriptive Croatian accen- tual norm has been widely noted, but such observations are largely impressionistic. Relatively little acoustic data is available for the realization of lexical prosodic features specifically in Croatian, as opposed to other closely related varieties, and previous studies have focused mainly on measurements of isolated forms produced by “model” speakers, chosen specifically for their ability to reproduce the standard accentuation. The current study analyzes samples of connected speech taken from recordings of the program Govorimo hrvatski on Croatian Radio 1, comparing the results to those in pre- vious acoustic studies of Croatian or Serbian accentuation. The implications of these findings for the viability of the current prescriptive norm are considered within the Croatian sociolinguistic context.

Olga Steriopolo
Abstract: This paper investigates the morphosyntax of gender in Russian sex-differ- entiable nouns within the framework of Distributed Morphology (Halle and Marantz 1993; Halle 1997; Marantz 1997), which, to the best of my knowledge, has not been studied before. Distributed Morphology differentiates between word formation from √ roots and from syntactic categories; this distinction enables us to analyze syntac- tic processes that happen within words. The paper argues that grammatical gender in sex-differentiable nouns can be determined from a combination of the declension class and the natural gender of the referent. Thus there is no need to posit grammati- cal gender features in the syntax of such nouns. This work is a revision and develop- ment of the earlier Distributed Gender Hypothesis (Steriopolo and Wiltschko 2010). This research will be of interest to Russian specialists, language typologists, and the- oretical linguists, as well as to anyone interested in the Russian language and gender.