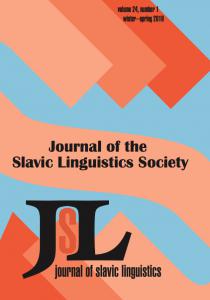 Conjunct Agreement and Gender in South Slavic: From Theory to Experiments to Theory    187

Abstract: The paper defines and analyzes the morphosyntactic properties of first- conjunct agreement, which arises when an adjective or verb agrees with the high- est/first conjunct of a coordinate noun phrase. This agreement pattern is derived by means of the syntactic operation Agree and a new postsyntactic mechanism which acts as a filter on Vocabulary Insertion within the framework of Distributed Mor- phology. The proposed filter is called Vocabulary Item Feature Harmony, and roughly consists of (phi-)feature identity between Vocabulary Items. The biaspectual analysis, and especially feature harmony, is used to understand and account for gradable and variable acceptability of first-conjunct agreement, as well as the distribution of this agreement pattern in relation to another agreement pattern, namely, masculine plural agreement (with the coordinate phrase as a whole). The investigation is focused on Bosnian/Croatian/Serbian first-conjunct agreement, but the findings could be extrap- olated to similar cases in other languages.

Abstract: This paper examines the availability of single-conjunct agreement in number and gender in Bosnian/Croatian/Serbian. Reported are the results of an experiment in which coordinated singulars are included, as well as disjunction and negative-con- cord conjunction, next to the typically examined conjoined plurals. The research shows that, contra the general assumptions in the literature (Marušič, Nevins, and Saksida 2007, Marušič, Nevins, and Badecker 2015, Bošković 2009) but in line with ear- lier research (Moskovljević 1983, Bojović 2003), single-conjunct agreement does occur with coordinated singulars, especially in gender, even if less frequently. This paper shows that (i) first-conjunct agreement in gender preverbally and even last-conjunct agreement postverbally are produced above error level, and that the availability of collective interpretations for the coordinated subject influences the acceptability of the different agreement patterns available, and (ii) number and gender agreement do not have to target the same constituent. The findings shed light on the relation between the features of number and gender with regard to the issues of their bundling and simultaneous agreement, where the experimental results suggest that, while number tends to agree in a pattern that fits either semantic agreement or agreement with the entire conjunction, gender prefers to target single members of coordination, the first or the last. We speculate that a degree of “attraction” obtains, whereby number may attract gender to agree with the entire conjunction or gender may attract number to agree with a single conjunct. The results are used to compare two analyses offered in the literature—Marušič, Nevins, and Saksida 2007/Marušič, Nevins, and Badecker 2015 and Bošković 2009—showing that our empirical findings are problematic for both, but give a certain advantage to Marušič and his co-authors.

Abstract: This paper shows that Bosnian/Croatian/Serbian (BCS), like Slovenian, has three distinct strategies for subject-predicate agreement when the subject consists of conjoined noun phrases: (i) agreement with the maximal projection, a Boolean Phrase (&P); (ii) agreement with the conjunct that is closest to the participle; (iii) agreement with the conjunct that is hierarchically the highest. In order to test the initial hypoth- esis that there are three agreement strategies, a controlled experimental study of the morphosyntactic agreement between conjoined subjects and participles in BCS was conducted, consisting of three experiments: an oral-production experiment, a writ- ten-production experiment, and an acceptability-judgment task. The experiments showed a high presence of default agreement and closest-conjunct agreement. Of the preverbal conjoined phrases, 50% elicited default masculine agreement, while 95% of postverbal conjoined noun phrases elicited closest-conjunct agreement. However, the bulk of the analysis was focused on the possibility of treating highest-conjunct agreement (HCA) as a legitimate agreement strategy. The agreement forms in the preverbal-subject (SV) examples showed HCA 7% of the time. Moreover, acceptabil- ity-judgment results showed that scores for HCA examples ranged between 2 and 3 (1 = weakly acceptable; 5 = strongly acceptable). Last-conjunct agreement (LCA) for postverbal-subject (VS) examples, on the other hand, occurred only in 1% of the exam- ples in the corpus, and these examples were mostly rated weakly acceptable by native speakers (1.5/5 on average). For this reason, they were classified as performance errors, eliminating LCA as an agreement strategy. The overall results go against Bošković (2009), who does not acknowledge HCA as a legitimate strategy, but they confirm the findings of Marušič, Nevins, and Badecker (2015).

Abstract: This paper aims to describe subject-verb agreement patterns within Polish co and który relative clauses in which the relativized subject head noun (virile and non- virile) modified by a higher numeral is assigned genitive case. Such subjects in Polish obligatorily induce default 3sg. neut. agreement on the main-clause verbal predicate. However, when the same subject is relativized while also being the relative-clause subject, various agreement options may occur depending on the type of relative marker as well as the grammatical gender of the head noun. In order to examine these agreement possibilities, a survey was conducted measuring Polish native speakers’ acceptability judgments. These patterns suggest that both co and który relatives could be derived via a matching analysis because they both allow optionality of agreement in certain environments. Furthermore, this optionality can be accounted for in terms of Case attraction and syncretism of case found in the paradigms of higher numerals and the relative pronoun który.

Abstract: In a recent elicited-production study with native speakers of Slovenian, Marušič, Nevins, and Saksida (2007) and Marušič, Nevins, and Badecker (2015) show that there are three distinct variously attested gender-agreement grammars. In this study, the high temporal-resolution of the ERP (event-related potential) technique was used to detect neurological components and measure the processing cost of the three gender-computing mechanisms. The study is comprised of two acceptability- judgment experiments, using a factorial design with nonmasculine mixed-gender con- juncts. Experiment 1 contrasts two strategies, Distant- (DCA) and Closest-Conjunct Agreement (CCA), to question whether the linear distance between a participle and the two conjuncts is language- or memory-related. The Experiment 1 results show be- haviorally an overall significant effect of gender; and neurologically a memory-related component, the P300. Experiment 2 sets out to detect alternations to the processing cost when default (Def) agreement is added to the experimental paradigm. The Ex- periment 2 results indicate no gender effects; instead, two language-related compo- nents, N250 and N450, were observed, statistically picking out DCA once again. We argue that in an ecologically valid environment where all three grammatical options are made available, processing of DCA is no longer supported by a general cognitive mechanism, such as memory, but is rather computed by language-related processes.

Abstract: The present experiment was designed to open a discussion on the processing of anaphoric clitics in Croatian. The aim of the experiment was to examine the role of long-distance anaphoric relations and local structural case constraints during pro- noun interpretation. On-line processing of cliticized direct-object pronouns embedded in a sentence context was examined using the event-related potential (ERP) technique. Pronominal clitics were either morphologically correct or incorrect. Incorrect pronoun forms contained a gender violation, a case violation, or a violation of both gender and case. Electrophysiological response to each of the violation types was measured at the clitic site and at the sentence-final word and compared to activity in the control condition. The results indicate that, as attested in previous studies in other languages, there are functional and temporal differences between the processing of gender and case violations in pronouns. Whereas gender violations elicit late positivity, i.e., the component related to the processing of syntactic difficulties, case violations elicit a biphasic response in the form of early negativity followed by late positivity. A similar ERP effect is observed with double violations as well, albeit with a different distribu- tion of the early negativity. The appearance of early negativities with case violations confirms previous findings on the rapidity of local syntactic processing as compared to the processing of long-distance anaphoric dependencies. At the end of the sentence, the typical wrap-up effect that reflects final semantic integration is replaced by the component related to syntactic reanalysis and repair.

Abstract: Agreement with coordinated subjects in Slavic languages has recently seen a rapid increase in theoretical and experimental approaches, contributing to a wider theoretical discussion on the locus of agreement in grammar (cf. Marušič, Nevins, and Saksida 2007; Bošković 2009; Marušič, Nevins, and Badecker 2015). This paper revisits the theoretical predictions proposed for conjunction agreement in a group of South Slavic languages, with a special focus on gender agreement. The paper is based on two experiments involving speakers of Bosnian/Croatian/Serbian (BCS) and Slovenian (Sln). Experiment 1 is an elicited production experiment investigating preverbal-conjunct agreement, while Experiment 2 investigates postverbal-conjunct agreement. The data provide experimental evidence discriminating between syntax proper and distributed-agreement models in terms of their ability to account for pre- verbal highest-conjunct agreement and present a theoretical mechanism for the dis- tinction between default agreement (which has a fixed number and gender, indepen- dent of the value of each conjunct) and resolved agreement (which computes number and gender based on the values of each conjunct and must resolve potential conflicts). Focusing on the variability in the gender-agreement ratio across nine combinations, the experimental results for BCS and Sln morphosyntax challenge the notion of gen- der markedness that is generally posited for South Slavic languages.

Abstract: The aim of this article is to briefly analyze the agreement patterns in Polish constructions with quantified subjects and participial/adjectival predicates. The anal- ysis addresses two troublesome issues: the Genitive of Quantification, i.e., the source of Genitive on the nominal complement in structural contexts, and the optionality in agreement in case between the participial/adjectival predicate and the numeral (≥ 5) or the noun of the quantified subject. The essential part of the proposal is based on the nanosyntactic approach to the nature of case, i.e., the split Kase Phrase (Caha 2009, 2010). The analysis is concerned with the functional sequence of the extended nominal projection and its role in the syntactic derivation of case.