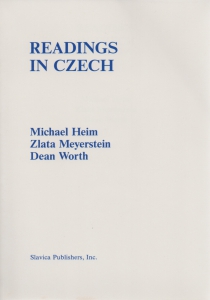 Readings in Czech is for students who have mastered the rudiments of Czech grammar. It introduces them to a body of Czech texts widely divergent in style and subject matter. Each selection is prefaced by a brief description of its source and context. A small number of the non-literary readings identified in the preface have undergone minor editing (mostly by deletion rather than addition or change). After working through the selections and memorizing the basic vocabulary words, students will be able to read most Czech texts without difficulty. For the historian the reader offers an outline of Czech history by one of the deans of Czech historiography, excerpts from Czech translations of Cosmas's Chronica Bohemorum and Charles IV's autobiography, selections about Hus and Comenius, an essay comparing Masaryk and Benesh, Masaryk's own essay on Communism, a sketch of early Czech emigration to America, a passage from Fuâk's Report from the Gallows, and a textbook account of the Slovak National Uprising. For the social and political scientist it contains the 1962 statutes of the Communist Party and "Two Thousand Words" -- the most controversial document of the 1968 movement. For the linguist there are articles on the differences between Czech and Slovak, the formation of the modern Czech lexicon, the structure of modern colloquial Czech, and examples of Slovak and Old Czech. The student of literature will find an essay on Prague School poetics by Mukarovsky, Masaryk's view of Tolstoy, and reflections on Kafka's Czech ties. Although some of these readings are necessarily specialized, none is so technical as to discourage the uninitiated. Furthermore, they occur side by side with abundant examples of Czech poetry, prose, folklore, and songs, and items of general interest (a letter written by Dvorak from New York, an analysis of the techniques of an important practitioner of the Czech cinema's new wave, etc.). The glossary comprises approximately 2,500 of the most common Czech words, culled mainly from Frekvence slov, slovnich druhu a tvaru v ceskem jazyce (Prague 1961) and supplemented by the vocabulary lists of several elementary Czech grammars and a modicum of grammatical terminology. Pertinent morphological information accompanies each entry. All words that do not figure in the glossary are defined on the page where they appear. The purpose of this system is twofold: first, it saves students the time of thumbing through dictionaries for words they are unlikely to meet again soon; and second, it provides them with a guide to high-frequency words, words they ought to be learning first. "...strongly recommended." (SEEJ) "...the book's only shortcoming is that it did not appear earlier." (CSP)