A Learner's Dictionary of Slovene, with Words in their Inflected Forms 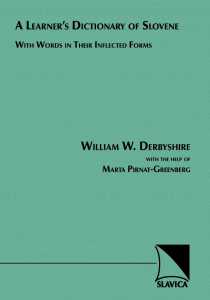 This dictionary, containing approximately 5000 Slovene words and their English translations, was written for users at all levels. Entries include the most commonly encountered words in Slovene, as well as numerous additional words which display irregularities in their inflection. The work is based on the contemporary Slovene language, with the five-volume dictionary published by the Slovene Academy of Arts and Sciences being the final arbiter in matters of stylistic level and form and stress. The main body of the work is preceded by lengthy charts which provide detailed information on nominal, adjectival, and pronominal declension and verbal conjugations in Slovene. Inflected words in the dictionary are then cross-referenced to those charts, the goal being to enable the user to generate the correct forms and stresses for entries. Many irregular words are provided with full inflectional charts in the dictionary itself. A Learner's Dictionary of Slovene is the only work of its kind to provide as complete information as may be found in Derbyshire's work. CONTENTS Foreword Abbreviations Reference Charts and Instructions on How to Use This Dictionary A Learner's Dictionary of Slovene