5000 Russian Words With All Their Inflected Forms: A Russian-English Dictionary 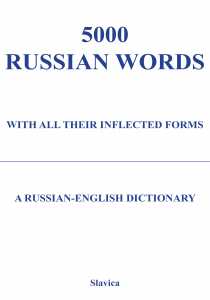 The purpose of this dictionary is primarily to supply complete information on the inflection of common Russian words in an accessible format for beginning students. In addition, a certain amount of information is given on pronunciation, syntax, collocations, and meaning. This dictionary presents inflectional information in two formats: (1) a succinct display of key forms much as in conventional dictionaries and (2) an exhaustive display of all the inflected forms. Thus, the student gets to see what is irregular about a particular word as well as its spelled-out forms. The appendix contains a complete statement of the rules of inflection. The sole authority for the inflection of words in this dictionary is Zaliznjak's Grammaticheskij slovar' russkogo zyka. In addition to the exhaustive display of inflectional morphology, the entries in this dictionary contain the following kinds of information: irregular pronunciation, stress patterns, English glosses, examples of usage, verb aspect (including semelfactives, inceptives, and restrictives), government (in the broadest sense, including adjectives, nouns, and prepositions, as well as verbs), a certain amount of collocational information, animacy (for all nouns, including adjectives used as nouns), marginal case forms (Locative and Partitive), adverbial forms corresponding to adjectives, inserted vowels (including specifications with words requiring the prepositional variants vo, so, etc.), syntactic information in cases of sex and gender mismatch (e.g. vrach), and information on predicatives. In addition to predicatives of the type nel'z, predicatives in o (like xolodno) are listed separately from adjectives and adverbs; this highlights the difference between the three meanings that o-forms sometimes have: xolodno: (1) cold, (2) coldly, and (3) it is cold, feel cold. All predicatives are illustrated with sentences, most of which are translated into English. The current edition also comes packaged with The Russian Dictionary Tree, a 17,000-entry learner's dictionary resource developed by Lexicon Bridge Publishers. "Addressed to both students and teachers, this dictionary should prove a valuable addition to tools supporting Russian-language study." (American Reference Books Annual) "...a first-rate work..." (RLJ) "5RW is a dictionary of the highest quality..." (SEEJ)