In the Realm of Slavic Philology 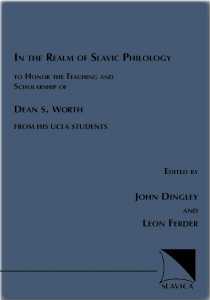 It is no exaggeration to state that Professor Dean S. Worth has been the most influential Slavic linguist in America of the first generation of scholars trained by Roman Jakobson. In addition to an extraordinary range of publications, he helped train several successive generations of younger Slavists, many of whom have helped establish graduate programs and further disseminated his influence through teaching and research. The present volume celebrates this aspect of his impact on the field by bringing together 16 articles on Slavic philology by former Ph.D. students of Worth's. The depth and breadth of the material covered in this collection both delimits the current concerns of Slavic philologists and demonstrates forcefully the range of his mentoring.