More Words to the Wise: Further Reflections on Polish Language, Literature, and Folklore 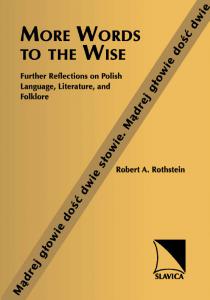 The present volume is a continuation to Rothstein’s first collection, Two Words to the Wise.  This edited collection of seventy-five of his columns deals with topics ranging from pierogi to pączki, from butterflies to ladybugs (and why the ladybug rejected a marriage proposal from a beetle), from the origins of the polka to the role of pineapples in Polish literature, from why death is portrayed as a woman in Polish folklore and poetry to why Polish folk wisdom claims that there are more doctors than anything else in the world. You don’t have to be Polish – or even know Polish – to enjoy the essays collected here.

Since July 2004 the author has been writing about Polish language, literature, and folklore for the Boston-based biweekly Biały Orzeł/White Eagle. Inspired by the calendar, by items in the Polish press, by his experience learning and teaching the Polish language, by new acquisitions for his home library, by questions from readers, and by serendipity, he has explored, among other things, the origins of words and expressions, the grammatical peculiarities of the language, and the reflections of everyday (and not so everyday) life in Polish proverbs and folksongs and in the works of great Polish writers.

Robert A. Rothstein is professor of Slavic and Judaic Studies and of Comparative Literature, and adjunct professor of Linguistics at the University of Massachusetts Amherst, where he also holds the Amesbury Professorship in Polish Language, Literature, and Culture and regularly teaches the Polish language. After studying mathematics and linguistics at MIT, he earned the Ph.D. in Slavic Languages and Literatures at Harvard. He has published widely in the areas of Slavic linguistics, folklore, cultural history, and music. His contributions to Polish studies include the chapter on the Polish language for the Routledge handbook The Slavonic Languages and articles on the publicistic works of the great Polish linguist Jan Baudouin de Courtenay, on aspects of Polish syntax, on issues of sex and gender in the Polish language, as well as studies of mutual cultural and linguistic influences between Polish and Yiddish, and articles making use of Polish folkloric material. In 2013 he was awarded the Officer’s Cross of the Order of Merit of the Polish Republic by President Bronisław Komorowski in recognition of his work of more than four decades in supporting and promoting Polish culture.