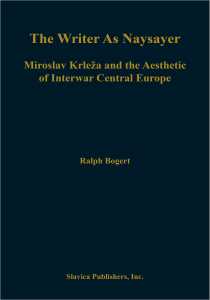 Bogert's book studies the most culturally and politically influential Yugoslav intellectual of the twentieth century with emphasis on interpreting this many-sided modernist, the most prolific and arguably the most important author writing in Serbo-Croatian in this century, with reference to Central European and South Slavic literary traditions. Informed by recent directions in literary theory and philosophy, cultural and social history, and transgeneric textual criticism, this is a major contribution to scholarship on Krlezha. Drawing extensively on more than one hundred primary texts, with all quotations from the original accompanied by English translation, the book examines in detail Krlezha's non-fiction writing, especially his key essays on art, science, creativity and culture. It traces the philosophical link between ethics and aesthetics from the critical legacy of fin de siecle -- pseudofeuilletonism and Sprachkritik -- to the catastrophist concerns Krlezha shared with Ady, Andric, Kraus, Lukács, Musil, Wittgenstein, and other Central European writers and thinkers. The book analyzes in depth the texts of Krlezha's Glembay prose and drama cycle, his group of works most relevant to the social and spiritual conditions of post-imperial Central Europe. Bogert synthesizes Krlezha's independent view of the committed creative imagination by defining the basis of his literary aesthetics and explaining his original conception of the "resonant aesthetic subject," "syncope," "clean palette," and "thematic substance" as seen in Dostoevsky, Lenin, Meshtrovic, Picasso, and Proust. He goes on to describe Krlezha's defiant use of these theoretical concepts during the conflict on the literary left as it played itself out in Yugoslavia on the eve of World War II, including an account of his dramatic clash with Dzhilas, Tito, and other communist ideologues and a discussion of the brilliant two-pronged polemical and belletristic strategy Krlezha employed in his novels, stories, poems, and plays to refute the doctrine of socially engineered art and bring about the earliest demise of Socialist Realism anywhere in Eastern Europe. The book concludes with an extensive bibliography and three indices.

"...impressive study ... deserves to be read by a wider audience outside the Slavonic academic world." (MLR)

"...highly recommended for those who care passionately about literature and culture, and for those who enjoy thought-provoking, conscientious, and truly intellectual scholarship." (SEEJ)