Vasiliy Pavlovich Aksenov: A Writer in Quest of Himself 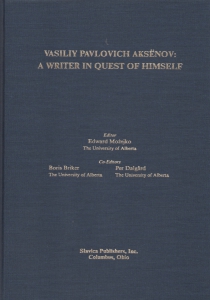 This collection of articles is devoted to Vasiliy Pavlovich Aksenov, one of the most outstanding writers in contemporary Russian literature. In spite of all changes, turn-abouts and zigzag developments so typical of Soviet cultural life in the past thirty years, Aksônov managed to shape his own creative profile as a writer independent of political pressures; he gained his artistic reputation not through opportunistic bows to the official party line, but through understanding literature as a spontaneous response to reality, and through fidelity to his own creative principles. In this respect, his prose represents one of the finest examples of the continuity of great Russian literature which can be traced back to the nineteenth century. Contributions included present and analyze various aspects of Aksenov's prose, beginning with his early novellas (Colleagues, A Ticket to the Stars), and closing with the novels published in the early eighties (The Burn). A discussion of Aksenov's experimental writing, including his plays, constitutes a substantial part of this collection. The articles here reveal both Aksenov's artistic evolution, the polysemic nature of his work and his attitude as the most outspoken representative of his generation. Since his debut in 1959, Aksenov's literary output has grown rapidly in volume, which calls for some sort of ordering of the material, and a commentary. V. P. Aksenov: A Writer in Quest of Himself responds to the needs of scholars and students interested in modern Russian literature. It includes a detailed bibliography of Aksônov's works and criticism about him.

Contents:
I. Lauridsen and P. Dalgrd: Interview with V. P. Aksenov;
V. Maksimov, E. Kuznetsov, N. Gorbanevskaya: A Conversation in the Editorial Office of Kontinent;
J. J. Johnson, Jr.: V. P. Aksenov: A Literary Biography;
R. L. Busch: The Exotic in the Early Novellas of Aksenov;
P. Dalgrd: Some Literary Roots of Aksenov's Writings: Affinities and Parallels;
K. Kustanovich: Notes on Aksenov's Drama;
I. Lauridsen: Beautiful Ladies in the Works of Vasiliy Aksenov;
P. Meyer: Basketball, God, and the Ringo Kid: Philistinism and the Ideal in Aksenov's Short Stories;
A. Vishevsky and T. Pogacar: The Function of Conventional Language Pattern in the Prose of Vasiliy Aksenov;
B. Briker: In Search of a Genre: The Meaning of the Title and the Idea of a "Genre";
E. Etkind: Mystianic Prose;
D. B. Johnson: Aksenov as Travel Writer: 'Round the Clock, Non-Stop;
N. Kolesnikoff: Our Golden Hardware as a Parody;
E. Mozejko: The Steel Bird and Aksenov's Prose of the Seventies;
A. Zholkovsky: Aksenov's "`Victory'": A Post-Analysis;
E. Etkind: Tianstvennaia (sic!) proza (Russian version of "Mystianic Prose").

"...a fitting tribute to one of the most innovative writers in contemporary Russian literature." (CSP) "The present volume... is a worthy tribute, maintaining a high academic standard throughout." (MLR) "...contributed a great deal to our understanding of Aksenov's work..." (SR)