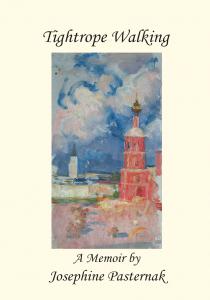 The Russian Poet and Philosopher Josephine Pasternak (1900–93) published two collections of verse during her lifetime, and her philosophical treatise Indefinability was brought out posthumously in 1998. Josephine belonged to a famous Moscow Family: her older brother was the poet and novelist Boris Pasternak and her father Leonid was a well-known early 20th-century painter. She left Russia in 1921 to study in Germany, married there, and subsequently emigrated to England. After the publication of Doctor Zhivago in 1957, Josephine was asked to write a history of the Pasternak family, which eventually led her to begin her own autobiography.

The memoir spans the years 1913–26 and records Josephine's transition from adolescence to young adulthood, first in pre-revolutionary Russia; then during the period of World War I and the Revolution; and finally in Germany during the early twenties. It provides a riveting picture of Russian life and personalities in the first quarter of the 20th century: Josephine describes middle-class life before the Revolution with wit and gusto, witnesses the events of 1917 in Moscow, writes humorously and irreverently about her working life in a government office, and ends with an account of her turbulent life in Berlin and Munich during the twenties.

Josephine constructs her life history as a frank exploration of her perceived failure to achieve her full potential in life, gradually uncovering the sexual and pathological origins of her later episodes of neurosis. Writing mostly during the mid-1960s, she would ever have called herself liberated, yet the autobiography emerges as a feminist text in spite of itself, centered in the tension between her genuine love for her family ad her repudiation of its control through a series of escapes: into neurosis and secret religious observances, fascinated both by the neatness and clarity of physics and mathematics, as well as under the spell of powerful superstitions and compulsions. The stress of reconciling these conflicting forces was to plague and exhaust her throughout her life. "Tightrope walking," she called it.

This memoir is a significant contribution to the study of Russian women's autobiography and, above all, a fascinating account of a remarkable young woman's life.