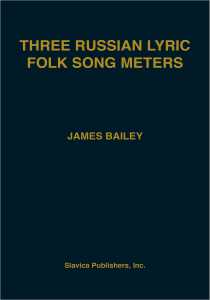 Although Russian literary versification has been thoroughly investigated, Russian folk verse has been relatively little studied. Epic verse has received the most attention and has been compared with the Serbo-Croatian deseterac in an effort to derive a Common Slavic epic meter. The most widely accepted attitudes about Russian folk verse are that it shares no rhythmical features with literary meters, consists of accentual or tonic verse, has lost a regular number of syllables per line, or has no meters. Such theories have been based on analysis of a small number of texts and have largely ignored lyric verse. In actuality, three kinds of verse coexist in Russian folk poetry: isosyllabic meters, accentual verse, and meterless verse. As an exploration into Russian folk versification this study reevaluates existing theories and offers a new interpretation by focusing on songs composed in three lyric folk meters -- the 5 + 5 form, trochaic tetrameter with dactylic ending, and a related type of two-stress accentual verse with dactylic ending. Since the language of folk poetry differs in many respects from contemporary standard Russian, much attention is devoted to accentuation and syllabification in folk songs. Although the noun in phrases such as "vo chisto pole" is customarily regarded as losing its stress and becoming an enclitic, in texts having thoroughly marked accentuation the stress of the noun is shifted to the second syllable to avoid clashing adjacent stresses -- "vochisto polio." Such shifting widely occurs in folk songs, affects most parts of speech, and can be ascribed to the action of a fundamental rhythmic law operating in folk verse. Russian singers are capable of creating songs with a regular number of syllables per line by selecting morphological variants, particles, hypocoristics, and filler vowels that exist in folk poetry. The chapters about accentuation and syllabification represent important contributions to the study of the traditional language of folk songs and provide many insights into the composition of oral poetry. Many misconceptions about folk verse arise because of a failure to observe a fundamental distinction between the fixed text of a literary work and the variable text of a folk song. Successive chapters are concerned with the three meters and with a typology of all Russian folk meters with dactylic ending. For each meter textological problems inherent to the study of folk songs are covered, rhythmical analysis is presented chronologically, and generic associations are delineated. For instance, the 5 + 5 form is associated with wedding songs and non-ritual lyrics, but not with epics. The trochaic tetrameter has been studied only in wedding songs. Its rhythmical structure is close to that of the same literary meter, thus showing that folk and literary verse have common rhythmical features. In regard to songs in two-stress accentual verse, the thesis is proposed that historically accentual verse originated from a partial loss of syllabism in isosyllabic meters and that meterless verse arose from further syllabic loosening of the lines. Consideration of all verse forms with a dactylic ending reveals that Russian epic verse had already lost isosyllabism by the time that the first recordings were made in the eighteenth century, but that isosyllabic meters exist in lyric genres to this day. The wide-spread but not total loss of syllabism may be attributed to the development of the uniquely Russian performance mode of lyric song termed the prothzhnah pesnh in which the verbal text is fragmented. Russian folk verse appears to have developed several innovations which set it apart from the verse of other Slavic traditions. Extensive bibliographies are included on folk song collections and on studies about folklore, Russian accentuation, the languages of folk poetry, and versification.

"Bailey's book will be essential reading for those with a specialist interest in Russian folk verse..." (SEER)