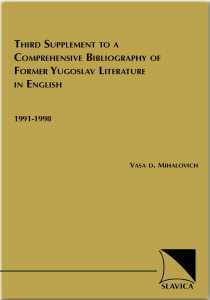 The Third Supplement to a Comprehensive Bibliography of Former Yugoslav Literature in English extends the project begun in 1976 with a preliminary volume-reprinted totally in 1984-and followed with the First Supplement in 1988 and the Second Supplement in 1992. The Third Supplement has added the word "Former" to Yugoslav Literature because of the political changes in the 1990s. This volume lists translations and criticism published anywhere in 1991-1998, as well as addenda. It follows closely the format of the previous volumes. It is all-inclusive (except for newspaper notices). Part 1 is preceded by a list of abbreviations, followed by the alphabetical listing of translations of folk literature in section 1. Section 2 of part 1 lists translations of poetry, fiction, drama, and literary essays by individual authors alphabetically (the definite and indefinite articles are ignored in alphabetization). Repeated translations of the same work are listed chronologically in the same entry; when the translations and the translator are the same, the translator's name is omitted in the subsequent source(s). In anthologies and sources with more than one work by the same author, the works are listed subsequently as they appear in the source, alphabetically by the first title only. Reviews of translated works follow the translation entry immediately. Part 2 lists all forms of criticism-reference works, books, articles, reviews, and dissertations. In obscure titles, the subject reference is provided in brackets. Authors of critical works are listed chronologically; anonymous works are listed under "Anonymous." Part 3 consists of indices. Index 1 lists the English titles or the first lines of works without a title. Index 2 provides titles of periodicals and newspapers, while Index 3 is the subject and name index (references to translated authors can be found also in part 1 and references to critics in part 2).