The Russian Idea: In Search of a New Identity 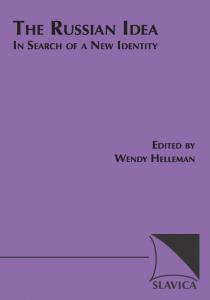 Too often the Russian Idea has been discussed in terms of political backlash to democratic reforms of the early 1990s. In Russia itself this Idea stimulated vigorous discussion of issues narrowly connected with rediscovering Russian identity in the post-perestroika transition. Articles translated for the present collection fall into two major groups, those addressing specific aspects of the Russian Idea: linguistic, sociological, culturological, and political, and those exploring its roots in Russian religous philosophy. Leading Russian thinkers of the mid-1990s like Bibler, Khoruzhii, Kuraev, and Rashkovskii address the largely forgotten pre-revolutionary heritage, as they discuss themes of Moscow as 'Third Rome', Slavophilism, imperialism, messianism, or civil society. The collection provides an important resource for post-Soviet thought, whether in politics, philosophy, religion or culture, and is useful for college and graduate courses in Russian studies.