The Darkling: A Treatise on Slavic Vampirism 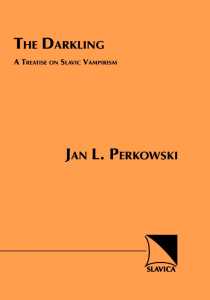 Some years ago, while pursuing folklore field work in eastern Canada, the author stumbled upon an active vampire cult. The interest aroused by this discovery led to a series of invited lectures and eventually the establishment of a college course called "Vampires of the Slavs." The questions asked by each new group of students resulted in the present monograph, a well-researched and carefully reasoned "All You Wanted to Know About Vampires but Were Afraid to Ask." Despite its scholarly rigor, The Darkling is intended not only for the specialist in folklore or literature, but also for the general reader, who should find it both informative and entertaining, since it is very amply illustrated with original vampire accounts translated into English from over twenty languages, many for the first time.

Chapter I considers the questions of whether Dracula was in fact a vampire, and shows that there is no historical evidence to support the idea. Its origins stem directly from Stoker's novel Dracula. However, the fictional character created by Stoker has migrated far beyond the pages of this novel and now plays an active role in Anglo-American folklore. This shift from history to fiction to folklore is shown to be parallel to the evolution of the Bishop of Myra to St. Nicholas to Santa Claus. Chapter II probes the clouded origins of the European vampire, both the word and the concept. Chapters III and IV sort out daemon contamination, which is so common in earlier vampire literature. Chapter IV begins with an answer to the question: are there any real vampires? It goes on to define the four basic vampire types and then to contrast them with two other daemons: the mora (= succuba) and the poltergeist. Chapter V, which is about 30% of the entire book, consists of an application of an analysis outline to fifteen representative Slavic folkloric vampire texts. Included among them is the transcript of an 18th-century vampire trial, crucial new evidence for a proper understanding of the Slavic folkloric vampire. Chapter VI traces the reflection of Slavic folkloric vampire beliefs in West European literature and film, especially English. In Chapter VII the psychological underpinnings of vampire beliefs and their mechanisms of transmission are discussed, including the nature of belief, the role of dreams, urban legends, and diseases. Finally, there is a comprehensive, multi-lingual bibliography.

"Perkowski has provided us with an extremely valuable, scholarly, and, to my mind, near-definitive study" (Journal of American Folklore) "He succeeds in making available, in a lively and accessible style, perceptions of Dracula, and related vampires, as found in our legends, witchcraft beliefs, popular literature and media. Specialists, together with general readers, will be enriched by a reading of this informative monograph." (Come-All-Ye)