The Artist and the Tyrant: Vassily Aksenov's Works in the Brezhnev Era 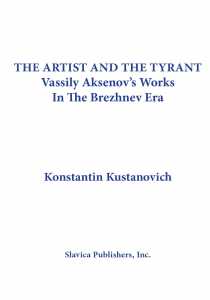 Vassily Aksenov is generally recognized as one of the most prominent and important writers of the post-Stalinist period in Russian literature. He started the revival of experimentation in artistic technique after thirty years of the mandatory, but barren, style of Socialist Realism. He is perhaps the most significant heir of the Gogolian tradition in contemporary Russian literature. His phantasmagoric fiction of the period, analyzed in this book, constitutes a body of literary material extremely rich in both its linguistic and symbolic aspects. No less significant is his role as a chronicler -- the most important events in Soviet political and cultural life receive his thorough attention and promptly materialize in the complex fabric of his works. This book presents a broad, unified view of Aksenov's work during the period 1963-1979, including his main novel, The Burn. It describes artistic and thematic aspects of Aksenov's most important writings taken as an artistic whole. It facilitates the understanding and interpretation of the symbolic complexity of Aksenov's "fantastic inventions" and analyzes the artistic world that recurs in each of the works under consideration. The book demonstrates that whatever the setting in these works, the main conflict remains the same: creativity versus totalitarianism. The book also touches upon the theoretical problems of interpretation of the fantastic in literature and its functions.

"...should be on the shelves of all libraries that serve Russian programs." (Choice)

"This very solid and well-grounded book is characterized by clarity of scholarly objective and consistency in its pursuit. ...a truly innovative and fruitful approach..." (CSP)

"...and as a result of it our understanding of one of the best contemporary Russian prose writers is considerably advanced." (SEER)