Style and Structure in the Prose of Isaak Babel' 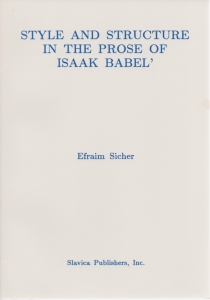 Isaak Babel' (1894-1940), the author of Red Cavalry, Odessa Tales, and Childhood Stories, is regarded by many as a master of the modern short story and a worthy heir of Chekhov. His laconic prose intrigues the reader and his bold imagery is strikingly innovative. For the first time the unexpurgated, complete versions of Babel''s fiction of the 1920s are analyzed to explain howBabel''s stories achieve their extraordinary effect. Several aspects of Babel''s art are shown in a new light and use is made of archival sources previously unavailable to Western scholars. The author insists on the functionality and the contextuality of style and structure and argues for the fundamental unity of Babel''s writing. Babel''s aesthetic credo reflected a paradoxical and unique vision of man in war and revolution and it placed his epic potentiality for the heroic alongside his bestial cruelty. Contents: 1: A Brief Literary Career: The Life and Writings of Isaak Babel'; 2. The "Army of Words": Babel''s Poetic Prose; 3. Sex and Violence: An Art of Contrasts; 4. Setting and Characterization; 5. Register and Point of View; 6. Stylization, Linguistic Interference and Skaz; 7. The Alien Voice; 8. The World Through Spectacles: The Estrangement of Narrational Vision; 9. Aspects of the Narrative Structure; 10. Line and Color: The Aesthetics of Isaak Babel'; Notes; Bibliography. The bibliography of Babel''s works and of criticism on him is the most complete to date. Sicher is the editor of two volumes of Babel''s collected works in Russian. "A fine, scholarly study highly recommended for specialists in Russian literature..." (Choice) "...has much to offer the student of Babel, and of Soviet fiction in the twenties more generally" (SSR)