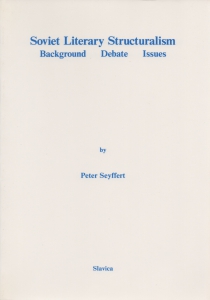 The sharp controversy of the 1920's between Russian formalists and Marxist ideologists resulted, for Soviet literary scholarship, in a lasting categorical opposition to all "formal" studies; failing the criterion of ideological commitment, "Formalism" became synonymous with "anti-Marxism." Extended to all art and art criticism, this attitude produced tragic excesses during the postwar Zhdanovist era. With the onset of de-Stalinization there came official regret over past persecutions, but "Formalism" remained infamous. Given this background, the emergence of Soviet literary structuralism in the early sixties was a surprise. Western scholars who began to take notice of this development variously mentioned its connection with structural linguistics, cybernetics, and machine translation, but how all these fields related to the study of literature and how Soviet structuralists could challenge a seemingly impervious anti-Formalism remained unclear. This book traces the backgrounds of Soviet literary structuralism, renders the ensuing debate, and analyzes the main issues. It is based primarily upon Soviet publications, and proceeds from a thorough examination of the events and writings to a synthesizing discussion of the main issues over the period since 1945. "SLS:BDI is a prodigiously detailed, thoroughgoing, and authoritative account of a major episode in recent Soviet intellectual history." (SR) "...un ouvrage de reference indispensable pour tous ceux qui s'interessent a l'histoire literaire, artistique "ideologique" et politique de l'U.R.S.S." (Revue des etudes slaves) "All in all, Seyffert's is an achievement of mature scholarship which holds lasting value for future historians of Russia's intellectual and social history (RLJ)