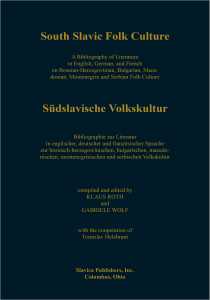 "Recommended for Balkan, Slavic, and folk culture collections at the upper-division undergraduate level and above." (Choice)

"...will be welcomed by scholars interested in the Balkans." (Journal of American Folklore)

"It is surely an indication of the success of a volume such as this that the user's reaction should be to wonder how it was possible to have managed without it." (SEER)