The Russianization of Gil Blas: A Study in Literary Appropriation 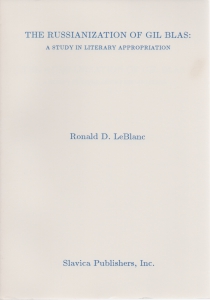 Although the novel eventually achieved an unprecedented artistic and philosophic greatness in nineteenth-century Russia, the process of naturalizing this European literary form on Russian soil proved, especially in its initial stages, to be difficult and often unsuccessful. During the early years of the nineteenth century, when an appropriate prose idiom was gradually being forged in Russia, major and minor writers alike struggled to capture the distinctive features of the native life they witnessed around them on the pages of "original" Russian novels, novels that were nevertheless highly indebted to foreign models for both their style and their structure. In his book, the author studies the fate of one particular European model in nineteenth-century Russia: Alain Renï Lesage's Histoire de Gil Blas de Santillane (1715-35). He examines the attempts made by several writers, among them Pushkin and Gogol as well as Narezhny, Bulgarin, and Simonovsky, to exploit the literary possibilities offered by this popular French eighteenth-century work. In appropriating the hero as well as the narrative structure of Gil Blas, transplanting them both to native soil, and adapting them to fit the peculiar cultural exigencies of life in tsarist Russia, these writers sought above all else to transform Lesage's picaresque classic and thus effectively to "Russianize" it. Contents: 1. Introduction; 2. Lesage's Gil Blas Comes to Russia; 3. Narezhny's "Rossiiskii Zhilblaz"; 4. Bulgarin's "Russkii Zhilblaz;" 5. The Demise of the Genre in Russia. "This work quite nicely achieves its goal of illuminating the major Russian nineteenth century variations of the picaresque novel. ... LeBlanc's study is informative, clearly presented, and sufficiently comprehensive to provide most students with a good working acquaintance with the background of the picaresque novel..." (SR) "But LeBlanc's treatment of it proves to be stimulatingly broad. ...it is extremely well prepared and presented, and written in clear and incisive English. ... In short, this is a much more important book than its title might at first suggest." (NZSJ) "...a major contribution to the still-understudied topic of the origins of the Russian novel ... a book that is so informative and stimulating." (RR)