Russian Literature in the Baltic between the World Wars 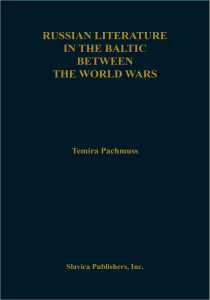 The accomplishments in Russian belles-lettres of the authors who lived and worked in the Baltic countries (Estonia, Latvia, Lithuania, and Finland) between the World Wars have yet to find their deserved audience of appreciative readers and scholars either in the East or the West. This volume is a start at filling the gap in the exposition and analysis of Russian emigrï literature created in the Baltic area. It demonstrates the authors' great diversity as writers and encourages exploration into this unique literary legacy. No comparable work is available in any language. Russian Literature in the Baltic between the World Wars brings into focus various literary genres, aesthetic credos, and individual artistic methods. Important and original Russian poets and fiction writers discussed here include I. Severyanin, P. Pil'sky, Yury Ivask, Igor' Chinnov, Vera Bulich, Boris Nartsissov, Leonid Zurov, Ivan Savin, Boris Dikoy, Vasily Nikiforov-Volgin, Yury Galich, Vasily Sinaisky, Sergey Mintslov, Vadim Gardner, and many other poets and fiction writers who made their debut in the Russian press abroad at that time. Included (in English translation) are samples of fiction, literary criticism, reminiscences, travel notes, one-act plays, and poetry. Since most of the materials provided here are almost completely unknown to students of Russian literature, this book may well be their first introduction to the extraordinary verse of Vera Bulich, Boris Pravdin, Ivan Belyaev, and Valmar Adams-Alexandrovsky, or to some of the finest writings of Boris Semnov, Boris Nazarevsky, and Sergey Mintslov. The essentially modern character of Russian literature in the Baltic, its stylistic experimentation, and its philosophical and psychological content are clearly of far-reaching significance within the international context of the twentieth-century avant-garde experience, for the emigre phenomenon is not merely an isolated addendum to contemporary literature but is organically linked to its development. The book is also a reminder of that tragic page in the history of Russian literature and art where the "Silver Age" of Russian literature and culture was obliterated by political developments and censorship. The Northern Aurora of Russian literature in the Baltic abruptly died away, ending in the murky night of Socialist Realism. Russian Literature in the Baltic between the World Wars is based upon materials obtained from various personal archives, as well as from the Slavic section of the University of Helsinki Library. "...provides a rich panorama of Russian cultural life in the Baltic countries during their short period of independence between 1918 and 1941." (World Literature Today) "...the student of Russian emigre literature owes a debt of gratitude to Professor Pachmuss for her effort..." (SEEJ) "Die Materialfuelle, die Frau Pachmuss vor dem erstaunten Leser ausbreitet, ist ueberwaeltigend.... Noch viel reicher ist das Bild, das Frau Pachmuss in einer ausfuerlichen einleitenden Eroerterung vom literarischen, kuenstlerischen, allgemein kulturellen und wissenschaftlichen Leben in den baltischen Staaten und Finnland entwirft." (KL)