The Russian Gothic Novel and its British Antecedents

Mark S. Simpson
OUT OF PRINT 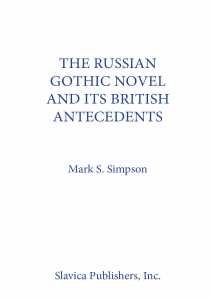 The Russian Gothic Novel surveys the long-overlooked subject of the Gothic novel in Russia. It focuses upon a variety of Russian writers, ranging from Karamzin and Bestuzhev-Marlinsky to Dostoevsky, Turgenev and Tolstoy, who were influenced by British Gothicists like Ann Radcliffe. The excitement and dynamism of the Gothic has long been ignored, as has the infusion of spirit into Russian literature from the Gothic. The Russian Gothic Novel dispels the myth that the Gothic was simply about things which go bump in the night. It was perhaps the first truly psychological literature, involved with mortality, justice, natural right and wrong, aristocracy and mystery. Although the appurtenances of the Gothic, creepy castle crypts and cobwebs, often lasted as the chief legacy of the Gothic, these devices were not what attracted Russian writers to the genre. Each writer saw something unique in the Gothic but they all saw a literary form which challenged, roused a reader's sentiments, and gave cause for thought. In Russia the Gothic was, at times, nothing short of insurrectionist, questioning time-honored social norms and political customs. To dismiss the Gothic as nothing more than a fad, which dovetailed into or out of Romanticism, would be to overlook one of Russian literature's more important areas.