The Russian Context: The Culture Behind the Language 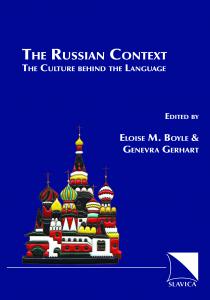 The Russian Context defines Russian culture by describing the limits of the common (high) culture as it is referred to in everyday language. By high culture we mean literature, art, science, history, and we also include proverbs, government, and geography. This is not, however, the history of historians, the science of scientists, or the art of art critics. It is the background of information one educated Russian expects of another when they speak. Its appearance in language is taken as the evidence of the culture. The Russian Context is a collectively authored monograph which aims to quantify the minimum level of cultural literacy necessary for serious foreign learners of Russian to appreciate and function properly in the Russian cultural context. The book covers the full spectrum of Russian culture and is bundled with a CD-ROM disk enriched by nearly 1,800 graphic and sound files.

"The Russian Context... is infinitely rich and varied; in a way it may be even more difficult to become 'fluent' in a language's context than in the language itself, but this volume will provide readers with an excellent start."  From the foreword by Barry Scherr, Dartmouth College