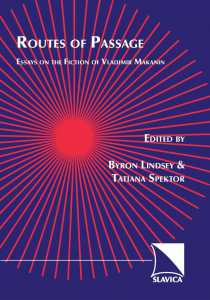 Vladimir Makanin impels the Russian tradition at once in two established directions: back to its sympathy for the "little people" in al their social exigencies and forward into a new life fraught with doubt, bad memories (and bad teeth), and yet the need for self assertion and new forms of expression. In terms of fiction, his works, whatever the precise historical contexts, are experimental and philosophical, with stressful lines leading to immediate questions, even about the works themselves and the forceful act of writing "fiction." Long praised by Russia's major critics, including Irina Rodnyanskaya of Novy Mir and Natalya Ivanova of Znamya, as a "living classic" and a perennial favorite writer among the intelligentsia, Makanin remains little known in North America, even among Slavists. Co-edited by Slavists Byron Lindsey and Tatiana Spektor, this collection of essays with its multiple points of view, scholarly and critical analyses of subtexts, and full bibliography, provides both an introduction to Makanin as one of Russia's most independent contemporary voices and a guide to his genuinely circuitous routs, equally as a writer and a creative witness to Russia's historical tensions in the 20th century. His epic novel Underground, or a Hero of Our Time, set in the contiguous Soviet/postSoviet period, receives special focus. The critical essays receive valuable augmentation by Makanin's own autobiographical profile and a revealing new interview conducted by St. Petersburg scholar Vladimir Ivantsov. Byron Lindsey (Department of Foreign Languages and Literatures, University of New Mexico, Emeritus) is a specialist in contemporary Russian literature with an emphasis on its historical and comparative cultural contexts. He has translated a variety of fiction from the period, including works of Makanin, Pelevin, and Evgeny Shklovsky, co-edited the two-volume collection of late Soviet literature "Glasnost" and "The Wild Beach" (Ardis, 1990, 1992) and written widely on Soviet "underground" art. Russian Orientalism and its impact on the cultures of the Caucasus is the new focus of his research for a monograph on the classical lyric poetry of Dagestan (eighteenth-twentieth centuries). Tatiana Spektor is a specialist on the fiction of Yuri Trifonov (1925-81) with a Ph.D. dissertation (Department of Slavic Languages and Literatures, University of Kansas, Lawrence, 1997) on the Christian subtext in his "Moscow Stories. She was a Fulbright scholar to the Moscow State Pedagogical University in 2002, and has played a pro-active role in the American community of Slavic scholars. Previously a professor of Russian at Iowa State University, Ames, she is currently affiliated with the Russian Orthodox Church Outside Russia and resides in France.