Richard Burgin A Life in Verse

Diana L. Burgin
OUT OF PRINT 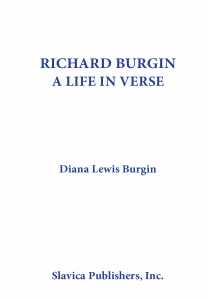 This book is both a continuation of Slavica's tradition of publishing scholarly books on literature and a departure from our usual type of book. Richard Burgin, a Russian Jew, was born in Warsaw in 1893 and educated at the Petersburg Conservatory of Music. From child prodigy to concertmaster and associate conductor of the Boston Symphony Orchestra, his story intertwines Russian culture and the new life that he made in America. His daughter's book is interesting on several levels. It should be noted that the entire book, other than the notes and bibliography, is written in the "Onegin stanza" (14 lines, iambic tetrameter, with fem/MASC rhymes: aBaBccDDeFFeGG) in English. The degree to which it reminds one of the original will be striking to those who have read Onegin in Russian. It is not really a biography of Richard Burgin in senso stricto, but rather an imaginative work based in part on Burgin's life and reminiscences up to 1943. It is also related, in many ways, to Pushkin's novel in verse. The outside reader to whom the manuscript was submitted responded that it "...constitutes a brilliant if covert commentary on Onegin. ...But why Richard Burgin? He was the concertmaster of the Boston Symphony for many years, a musician's musician. He is part of the 'generation of the 1890s' of Jakobson, Majakovskij, etc., of whom much is being written now, and of the many Mischas and Jaschas, boy prodigies who were plucked out of the various Slavic ghettoes to study violin in [the] Peterburgskaja konservatorija. The book is a very interesting chronicle of the music scene in Russia at the time, and of [the] US emigre Russian music scene, from prodigy concerts at Carnegie Hall to the BSO under Koussevitzky and since. It should appeal to Slavists and musicians, and to emigres of all generations, including the very latest ...this book illuminated Onegin for me as much as any of the well-known translations-comments -- and in a fresh and memorable way. In a different way." You will find this book absorbing and delightful, and if you are a Russianist, you'll also find yourself reading sections from it to your friends. The book is different from most of our books, but vive la différence!