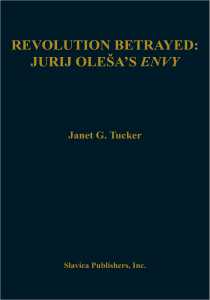 In the novel Envy Jurij Olesha addressed one of the most critical issues of his time -- the impact of the October Revolution on Soviet intellectuals. This issue is part of the larger cultural and literary paradigm which surfaced in the nineteenth century, namely, the isolation of intellectuals from both the autocracy and the lower classes. Since open condemnation of the system was unwise and difficult, Olesha resorted to an indirect critique of the underlying philosophical structure on which the new state was based. The complex images for which Envy is famous and respected have inspired incisive criticism, especially in the West, but these studies have, typically, ignored political and philosophical concerns central to the work. Political issues addressed in the novel were not lost, however, on critics. Olesha's contemporaries initially praised Envy but were subsequently uneasy about it, especially upset by what they perceived as his biased treatment of the main characters. Given that Russian literature has long been the arena where social and political conflicts are embodied in personae representing opposite arguments, their reaction was no surprise. No critics, however, looked for political or social judgments in the images or cultural references themselves, where Olesha concealed his most subtle and damning attack. By considering mythic archetypes of revolution, gender, and marriage, Olesha touched on the larger questions central to his work -- the perpetual flux of revolution and the connection between the family and revolt. The function of the writer relative to the Russian/Soviet state and his use of language, both tool and weapon, focus on the larger issue of revolution -- specifically on the role of literature -- as counterweight to the system. Olesha's use of intense visual images and his simultaneous admiration and castigation of experimental art and artists are central to the larger question of revolution as a universal phenomenon.