Pushkin: A Concordance to the Poetry 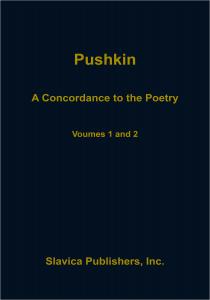 This Concordance, which contains every line of verse written by Russia's greatest poet, is the first and only work of its kind to be published anywhere, and will be an indispensable work for all scholarly libraries and for specialists in Russian poetry. It lists alphabetically all the Cyrillic word forms found in all the basic texts of all the poetry and it gives the following information for each: the number of times that it occurs and also the number of lines in which it is used; it gives the poem-and-line location and quotes in full the complete line in which the form appears. The listing of these Cyrillic word forms is with no exceptions; all the lines of poetry are quoted under each word form except for eleven function words which occur with extreme frequency: a, v, za, i, k, kak, na, ne, no, s, chto. The Concordance is based upon the most authoritative and complete edition of Pushkin's works, the so-called "large Academy" edition, and reproduces the orthography and punctuation of all the Russian-language poems of that edition, including unprintable and Latin-alphabet words in them; it includes all the verse of the basic texts, but not variants. Many special features are included to help the user. Special tables supplement the Concordance proper: Lines Containing Unprintable Words; Lines Containing Latin-Alphabet Words; Hyphenated Words: Normal Alphabetical Order; Hyphenated Words: Reverse Alphabetical Order. An important feature of this Concordance is that it prints the stress for all 42,433 endwords (words that rhyme or could rhyme), so that the reader can tell at a glance whether a given line is fragmentary; otherwise one could not be certain in all instances.