Edited by Andrej Kodjak
OUT OF PRINT 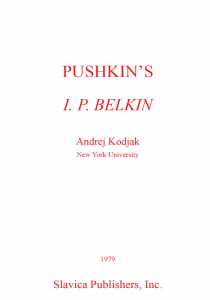 By an analysis of the information about Belkin and the circumstances of the writing of the work, it is shown that Pushkin intended the work as a coded message concerning December 1825 and the events which followed.

2. The Publication of Belkin's Manuscript

3. The Correspondence Between the Editor and the Neighbor

Part III: Writing and Publishing: 1. The Time of Conception

"The argument is close and probably as convincing as it is possible to be. ... A worthy bit of literary detective work, written in a clear, concise style, the book is recommended for college and university libraries having good holdings in Russian literature." (Choice)

"Kodjak has presented convincing evidence that Pushkin has given us far more than charming but vacuous romantic narratives. The Tales of Belkin emerge as a coded historical account necessitated by the conditions of strict censorship. New light is shed upon the creative process, and the monograph must be hailed as a meritorious contribution to the annals of pushkinovedenie." (SEEJ)