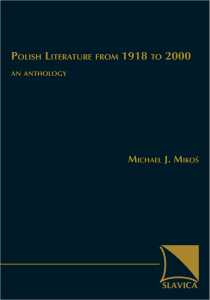 This double volume covers the periods from 1918 to 1939 and from 1945 to 2000 and constitutes the sixth and last part of the history and anthology of Polish literature from its beginnings to the year 2000. The task of making a comprehensive selection of authors and their works, particularly for the period from 1945 to 2000, was particularly difficult and resulted in regrettable sacrifices and omissions. Firstly, the size of this anthology was limited to about 400 pages, not counting introductions, bibliographies, and illustrations. Consequently, it was possible to include only 63 authors and 224 selections, allowing for an average of about six pages per author. Secondly, the works of many leading poets, novelists, and playwrights […] are already available in numerous English translations, listed in select bibliographies of this volume. Thirdly, there is no contemporary literary canon acceptable to the majority of readers and scholars. Needless to say the present controversies concerning the literary canon, driven often by ideological considerations, do not make the task any easier. Fourthly, a postwar canon imposed on Poland was based on political considerations derived from communist ideology. Finally, the regaining of Poland’s independence in the 1990s brought about a veritable publishing explosion, mostly of historical works, but also of the pulps, crowding out, this time commercially, valuable works of literature. This situation, combined with the coteriean practices of the dominant political and intellectual elites, mostly post-communist, and the subsequent fluctuations in the publishing market, additionally obscured the literary scene and made it difficult to evaluate readers’ preferences. Consequently, the politically distorted and fragmented history of Polish post-war literature requires rigorous reexamination. It is still too early to predict which works will survive the rigorous test of time. But as in the previous volumes, my main goal has been to present a broad and balanced selection of Polish literary texts to English-speaking students and general readers.