The Mother Syndrome in the Russian Folk Imagination 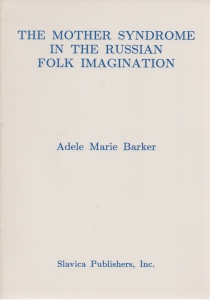 This study provides a psychological investigation into the mother-son relationship in Russian folk and literary tradition. Beginning with the byliny, it examines the origins of the strong woman figure whose power over her sons results in their regressive behavior and inability to sever the oedipal ties with her. Hence the tales of Dobrynia and the Dragon, Vasilii Buslaev, and Sadkocan be seen not only as epic narratives but as symbolic explorations of the complex dialectic between mother and son. The complex relations between mother and son continue down into nineteenth century Russian literary tradition in the works of Pushkin and Dostoyevsky. While Pushkin's "Queen of Spades" continues the tradition of the strong woman figure whose oedipal influence over her son causes his ultimate demise, Dostoyevsky bequeathes a new image to the mother who, in The Adolescent, ultimately conquers through passivity and through the force of love. The image of the mother is thus seen as evolving from the aggressive phallic mother to one who represents the source of salvation for her sons. "...she provides stimulating interpretations of the individual works she treats. ... Barker's monograph is well written and thought-provoking." (SEEJ)