Lives in Letters Princess Zinaida Volkonskaya and Her Correspondence 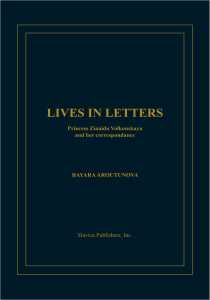 The letters to Princess Volkonskaya published in this book reflect nearly thirty years of Russian and European history: the Napoleonic Wars, victory and the subsequent upheavals, the religious struggles between the Russian Orthodox Church and the growing influence of Roman Catholicism. Her correspondents included Tsar Alexander I (with whom she had at least a very close relationship), Cardinal Consalvi (the Prime Minister of the Vatican), Mme. de Staël, various Russian writers, composers, and men of letters (Baratynsky, Kozlov, Glinka, A. I. Turgenev, Vyazemsky, and Zhukovsky). Pushkin dedicated a poem to her. Tsar Alexander's fifteen letters (always in his own hand) include some written at the height of the campaign against Napolean, and he goes into some detail about the events. Students of Russian will be heartened to know that Alexander "followed rather inconsistently the rules of French grammar." The book (and archive) also includes three letters written to her son, a senior Russian diplomat, and one to A. P. Golytsyn from I. S. Turgenev. All of the letters are accompanied by extensive commentary. Almost all of the letters are published in the original French; a few notes written in Russian are given in both the original and in English translation. Volkonskaya was a remarkable and talented person who enjoyed the friendship and confidence of many of the leading literary, musical, and political figures of her time. These letters present material that will be of interest for students of history, literature, and culture in general. "Recommended for research libraries." (Choice) "... cennaja publikacija ..." (Literaturnaja Rossija) "Taken as a whole, Aroutunova's book gives a vivid impression of this remarkable woman and her life." (SEER) "...this volume is an admirable synthesis of philology and empathy ... It is a pleasure to peruse this attractive volume..." (CSP)