Lances Sing: A Study of the Igor Tale 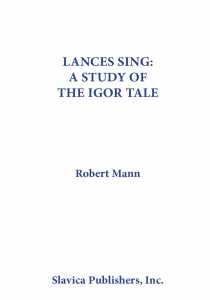 Robert Mann reexamines the hypothesis that the Slovo o polku Igoreve is the work of a highly literate poet and concludes that the Slovo is more likely the text of a 12th-century court song. This study introduces a large number of new folkloric parallels showing that ancient Slavic wedding ritual and wedding song motifs served as a primary model for many metaphors in the Slovo. Mann argues that the Slovo also adapts motifs from an even older cycle of oral tales about the conversion of Rus' and he attempts to reconstruct the outlines of this cycle on the basis of similar motif patterns in byliny and early Russian legends reported in chronicles and saints' lives. This older cycle portrayed the demise of the pagan gods along the lines of the Apocalypse, and Mann attributes some of the Slovo's apocalyptic motifs, such as "Troian's seventh millenium," to the influence of the earlier conversion cycle. Using folkloric sources, he reexamines the relation between the Slovo and chronicle accounts of the battle it portrays, concluding that both the Slovo and the chronicles drew from oral tales. The new folkloric parallels and other data shed new light on some of the Slovo's most obscure words and names, such as Khinova, Kaiala, shereshiry, paporzi, and Troian.

Contents:
The Oral Cycle about the Conversion of Rus';
The Conversion Cycle and the Slovo; Wedding Imagery in the Slovo;
Other Folkloric Parallels;
Other Formulas and Formulaic Motif Sequences;
Literary Influences;
The Slovo and the Zadonshchina;
Oral Tale or Stylization?;
Oral Formulas, Probability and the Authenticity of the Slovo;
Old Russian Text of the Slovo;
Textual Notes; Notes;
Selected Bibliography.

"It must be said that in this light much that is otherwise obscure or difficult to explain becomes clear.... Much becomes clearer as the author demonstrates, in the next and longest chapter, the abundance, hitherto underestimated, of wedding imagery in the Slovo.... (MLR) "For all Slavic studies and scholars of international oral narrative." (Come-All-Ye) "Mann has written a study that stimulates the imagination..." (RR) "...makes a contribution to Slovoscholarship and merits the attention of scholars." (SEEJ) "Die neue Arbeit wird ohne Zweifel Beachtung bei denen finden, die sich mit der Struktur des Textes beschaftigen." (KL)