Humor in the Major Novels of Dostoevsky 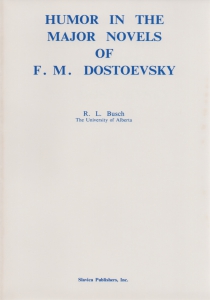 After an introduction which addresses the problem of humor in Dostoevsky's works and discusses previous approaches to it -- especially those of M. M. Baxtin and R. Hingley -- this study devotes a separate chapter to each of Dostoevsky's five major novels: Crime and Punishment(1866), The Idiot (1868), The Demons (1871-72), The Adolescent (1875), and The Brothers Karamazov (1879-80). The thematic and characterological functions of Dostoevsky's plethora of humorous elements are examined within structures that are treated as eminently serious, indeed, sometimes, as darkly neo-gothic. Consequently, the study points up the sharply contrastive, polyphonic, tonal environment for Dostoevsky's humor which is complexly nuanced by offsetting elements. While this book draws on Bakhtin's notion of polyphony and analyzes Dostoevsky's use of parodic satellites for his central characters, its examination of humor overall and satirical function in particular function calls into question Bakhtin's concept of voice equality in Dostoevsky's novels. "There are many suggestive insights in this work... All in all, this is a worthy and conscientious contribution..." (MLR)