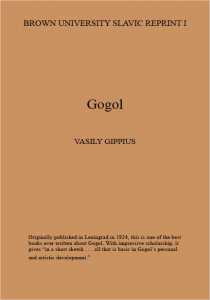 From the Brown University Slavic Reprint Series:Originally published in Leningrad in 1924, this is one of the best books ever written about Gogol. With impressive scholarship it gives "in short sketch... all that is basic in Gogol's personal and artistic development." Donald Fanger, the original series editor, notes in his introduction that:

Vasily Gippius' book, for all its physical slightness, is one of the very best things ever written about Gogol and, among that select company, one of the least read and cited. Published in 1924 in an edition of 3000 copies (not an unusual printing for a scholarly work in those days), it apparently failed to receive proper distribution, with the result that although the Malaya Sovetskaya Entsiklopediya in 1930 could praise its "thoughtful analysis...of Gogol's artistic work" and its revaluation of previous scholarly literature on the subject, it has been largely unavailable to students and critics for almost forty years.