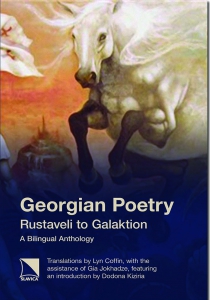 The poetry of Georgia, a country of ancient culture in the South Caucasus, is the crown jewel of its exceptionally rich literary heritage. Secular poetry, having emerged from the fusion of folk poems and religious hymns and homilies of the early Christian era over a thousand years ago, remained a dominant genre of Georgia literature well into the twentieth century. Even today poetry is held in the highest esteem as a particularly noble form of art, not just a domain of academic studies, but a part of daily life…. Poetry is indeed the key to understanding Georgian culture. The present anthology offers the English-speaking reader a first-rate collection of Georgian poems in translation, a valuable glimpse into the treasures of Georgian poetry.… (Lyn Coffin) has shaped the material into poems in English, while maintaining the distinctive voice and flavors of the originals, and staying as true to their forms as possible. Although the selection of poems is limited to the works of a handful of the most outstanding names, every single one of these poems is a masterpiece… — Dodona Kiziria, from the introduction to Georgian Poetry: Rustaveli to Galaktion. A Bilingual Anthology I praise and thank Lyn Coffin for bringing us these Georgian poets in such finely polished translations. — Sam Hamill, Poets Against War Lyn Coffin is a widely-published American poet, fiction writer, playwright, and translator. In 2007 she was awarded an honorary Ph.D. from the World Academy of Arts and Culture (UNICEF) “for poetic excellence and her efforts on behalf of world peace.” Lyn teaches literary fiction at the University of Washington (Department of Professional and Continuing Education), and leads translation seminars at the Shota Rustaveli Institute (Tbilisi) in the summer. Thirteen volumes of her poetry and translations have been published, and her plays have been presented in Singapore, Off-Off-Broadway theaters, and elsewhere. Many of her short stories have been published: one appeared in the collection Best American Short Stories edited by Joyce Carol Oates. A bilingual collection of her fiction is set to appear in 2013. She is currently working on a translation of Rustaveli’s The Knight in the Panther Skin. In 2014, Lyn will present her translations of Mohsen Emadi at the annual conference of the Association of Writers & Writing Programs in Seattle. See her website at http://lyncoffin.com