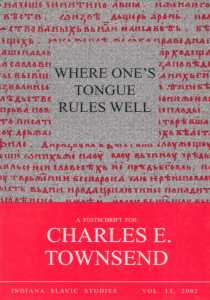 It may be stated without fear of contradiction that Professor Charles E. Townsend of Princeton University has been the most influential writer on Russian and Slavic grammar in the United States. Every graduate student devours his Russian Word-Formation, and returns to it over and over through his or her academic career. Many Slavists have studied Czech or Common Slavic from his books; and still others have studied or taught Russian from his textbooks. This volume in his honor features articles by his colleagues and former students devoted to four vital areas enriched by Charles Townsend's own scholarship and teaching: Language Function; Language Form: Phonology; Language Form: Morphology & Syntax; and Language in Context.

Form, Function, and Context: A Quest to Revel the Systems of Language     7

*Form, Function, and Context: A Quest to Reveal the Systems of Language

On Mnemonics, Word-Nests, and Etymologies     19

Cases in Collision, Cases in Collusion: The Semantic Space of Case in Czech and Russian     43

Demonstratives, Definite Articles and Clines of Grammaticalization: Evidence from Russian and Spoken Czech     63

Czech Stress in the Context of West Slavic     75

On the Classification of Ukrainian Nominal Stress Paradigms     91

Out of the Box; Biljana Sljivic-Simsic: Verbal Stems in -‹a and -ja in the Contemporary Serbian Language     147

Relational Features in Political Language: A Comparison of Speeches by Havel, Clinton and Mori; Emily Klenin: Russian Word Formation and the Heron     213

Russian Word Formation and the Heron     229

Orality/Literacy Contrast in the Development of Language Description     237

On the (Socio)Linguistic Status of the Bosnian Language Today     287