The Ashkenazic Jews: A Slavo-Turkic People in Search of a Jewish Identity 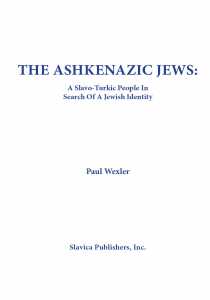 This book, a linguist's reassessment of early European Jewish history, will be of interest to anyone who has ever wondered how the Jewish people, lacking their own territorial base and living as a minority among often hostile non-Jewish peoples over the four corners of the globe, succeeded in preserving a separate identity for close to two thousand years. The book makes a number of innovative and controversial claims about the relationship of the contemporary Jews to the Old Palestinian Jews.

Recognizing the limitations of historical documentation, this book shows how facts about Yiddish and Modern Israeli Hebrew (presented in four recent books) can assist historians and archeologists in evaluating known data and artifacts as well as generate a new hypothesis about the origins of the Ashkenazic Jews, the north European Jews who have constituted the majority of the Jews in the world for the last several centuries. In Wexler's view, the Ashkenazic Jews most likely descend from a minority ethnic Palestinian Jewish emigre population that intermarried with a much larger heterogeneous population of converts to Judaism from Asia Minor, the Balkans and the Germano-Sorb lands (the Sorbs are a West Slavic population that still numbers about 70,000 in the former German Democratic Republic). Widespread conversions to Judaism that began in Asia Minor in the Christian era and ended with the institutionalization of Christianity among the Western Slavs in the beginning of the second millennium saved the tiny ethnic Palestinian Jewish population in the diaspora from total extinction. The major non-Jewish contributors to the ethnogenesis of the Ashkenazic Jews were Slavs, though there was probably also a minor Turkic strain -- both in the Caspian-Black Sea area (the descendants of the Khazars, a mainly Turkic group that converted to Judaism in the eighth century) and in the Balkans and Hungary.

In all of these areas, the Turkic population early became submerged with the coterritorial Slavs. In addition to Yiddish terms of Slavic, Greek, Romance and German origin which express aspects of the Jewish religion and folk culture, the book shows that many elements of Ashkenazic folklore and religion themselves were of Slavic origin -- either West (Sorbian and Polabian) or Balkan Slavic. There is a lengthy discussion of the evidence for widespread conversion to Judaism in Asia Minor, southern Europe and the Germano-Sorbian lands up to the twelfth century and the reasons why pagan and Christian Slavs converted to Judaism. While historians have been disputing the extent of conversion to Judaism, Wexler thinks the linguistic and ethnographic evidence make the conversion evidence highly plausible. In addition, Jewish linguistic evidence refutes the traditional claims that Yiddish is a variant of High German and that Modern Hebrew is a "revived" form of Old Hebrew; new hypotheses are proposed: that Yiddish began as a Slavic language (specifically a Judaized form of Sorbian) that was re-lexified to High German at an early date, and that Modern Hebrew is, in turn, Yiddish that became re-lexified to Hebrew, and thus is also a form of Sorbian. These facts support the author's hypothesis of the Slavic origins of the Ashkenazic Jews, and the bulk of their religion and folk culture.

The book proceeds to show how, under the conditions of relative separation from the non-Jewish population that developed after the twelfth century, the north European Jews developed elaborate processes of "Judaizing" their pagan and Christian Slavic religion and folk culture -- by inserting unusually large amounts of Hebrew elements into colloquial Judeo-Sorbian/Yiddish and by reinterpreting and recalibrating religious and ethnographic practices according to biblical and talmudic precedents; customs known to be obsolete among the Christians were retained by the Jews as "Jewish" practices. For example, the Slavo-Germanic glass-breaking ceremony intended to scare the devil away from the merrymakers at a wedding, was reinterpreted as remembrance of the destructions of the two Temples in Jerusalem. The ethnographic and religious evidence is taken mainly from discussions in the Germano-Slavic Hebrew religious literature of the thirteenth through sixteenth centuries which reveal that many rabbis were quite aware of the non-Jewish origins of Ashkenazic folklore and religious practices.

Where the rabbis could not convince the masses to abandon pagan-Christian customs, they were obliged to retain them, but in a "Judaized" form. The book offers a correction to the unsubstantiated views of the late Arthur Koestler in his The Thirteenth Tribe (London 1976), that the Ashkenazic Jews are largely descended from Turkic Khazars who converted to Judaism in the Caucasus in the eighth century. Wexler believes Koestler was right about a Slavo-Turkic basis for the north European Jews -- but that he erred in assuming the preponderence of Turks over other ethnic groups, and in placing the "homeland" of the Ashkenazic Jews in the Caucasus.

Where Koestler's evidence, mainly non-linguistic, was scanty and totally unreliable, Yiddish and Ashkenazic folk culture and religion provide a wealth of varied evidence that support a primarily Slavic ethnic origin for the Ashkenazic Jews. In opposition to the popular view that the Slavic imprint in Ashkenazic Jewish culture is a "late borrowing", Wexler sees the Slavic elements as an "inheritance" from the pagan Slavic cultures which were to become for the most part submerged and reformed under the impact of Christianity. Hence, Ashkenazic Judaism is essentially a Judaized form of Slavic pagan and Christian culture and religion (rather than an uninterrupted evolution of Palestinian Judaism) -- and the best repository of pagan Slavic folk culture that survives to our days. Wexler also proposes that the other Jewish diasporas -- e.g. the Sephardic, the Arab, Iranian, Chinese, Indian, Ethiopian and Yemenite -- are also largely of non-Jewish origin. The book compares the notion of Jewish peoplehood with attempts at rewriting the past found in many other societies. There is a bibliography of some seven hundred items and an index of examples.