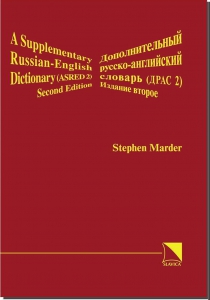 The new edition of A Supplementary Russian-English Dictionary (ASRED 2) follows the same principles outlined in the first edition of 1992 and, likewise, contains important words and expressions not found in either of the two dictionaries most often used in the U.S. It is primarily designed as a companion and supplement to these, although it may also be used independently. In ASRED 2 the net has been cast much wider than in the first edition and the volume of lexical material has been increased substantially. It builds upon what already exists, filling an alarming gap between what has been recorded thus far, and what is possible to record. The adopted approach was that of a single volume of manageable size which concentrates exclusively on previously uncited material. Any scholarship should be characterized by completeness and balance. In ASRED 2 the two have a special significance. The notion of completeness in a dictionary of a living language is a contradiction in terms: a language is constantly evolving, and the process is only complete when it dies. Even a meticulously developed and rigorously executed selection process has a certain randomness about it. By its very nature it will yield results that are weighted. If ASRED 2 has any bias at all, it is towards those areas of linguistic usage that have received the greatest prominence over recent years. The various linguistic forces at work result in a certain unevenness when one examines a synchronic slice of the language: some categories of words are scarcely noticeable, others abound. Here one has in mind terms which are a consequence of recent extraordinary political events, terrorism on a global scale, drug trafficking, technological developments, concerns about the conservation of natural resources, the spread of AIDS, and many other areas which are re-fashioning the world and its languages. ASRED 2 pays particular attention to the spoken word. This is amply illustrated by many thousands of words and expressions which bear stylistic labels denoting more relaxed forms of speech: colloquial, vernacular, vulgar, taboo and slang. ASRED 2 is both derivative and non-derivative. It is derivative in the sense that it continues a tradition in bilingual lexicography which goes back many years. Successive Russian-English dictionaries owe a tremendous debt to their predecessors. The non-derivative nature of this book is at the same time its greatest strength. ASRED 2 offers the user something new and exciting through its presentation in a convincing form of previously undocumented material in a bilingual dictionary. ASRED 2 can be used profitably by students of Russian, translators, interpreters or indeed by anyone who works on Russian seriously.

About the author: Stephen Marder has been continuously involved with the Russian language since the age of 18 in a great variety of environments: blossoming into an abiding passion at the School of Slavonic and East European Studies (University of London), through experience in the U.S. military, professional use as a translator in Mongolia, lecturer in Russian at Victoria University of Wellington (New Zealand), or program administrator and translator at George Mason University (Fairfax, VA). Most recently, the author has been applying his language skills in the government sector. ASRED and ASRED2 were both written and published during the author’s otherwise active career while living in vastly different places around the globe.