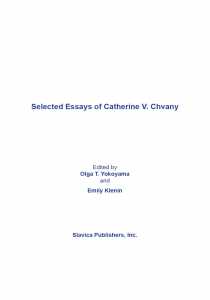 Contains a selection of work by one of the most important Slavic linguists of the past thirty years, along with introductions to the individual sections by other eminent specialists. While the material is primarily Slavic, most of the articles treat it in such a way that the results are of at least as much interest to general linguists as to Slavists. The editors have made a special effort to make the articles user-friendly. All examples are transliterated and provided with word-by-word glosses as well as translations. Accessible to a new generation of specialists in linguistics or poetics, whether or not they know Slavic, the book contains a combined bibliography with updated entries, a list of publications by Catherine V. Chvany, and a detailed Index. This book includes a major new essay (never published before), "Deconstructing Agents and Subjects" (Chapter 7), which provides a succinct inventory of Russian impersonal sentences, along with theoretical problems these sentences raise for the Theta Criterion (one role per argument) or the Extended Projection Principle (every sentence must have a subject), and a novel pragmatic-semiotic explanation of the well-known affinities between agents and subjects, agents and speakers, speakers and subjects, subjects and topics, and how all these relate to nominative case and agreement.

Part I: Syntax and Morphosyntax.
Introduction by Leonard H. Babby.
Chapters:
On Movement out of a Tensed S; The Role of Presuppositions in Russian Existentials;
When Byt' Means Have; Syntactically Derived Words in a Lexicalist Theory;
Markedness and a Modified A-over-A (with Evidence from Second Language Acquisition); Explain and Explain; Deconstructing Agents and Subjects.

Part II: Lexical Specification and Storage.
Introduction by Michael S. Flier.
Chapters:
On `Root' and `Structure-Preserving' -- Disposable Blades for Occam's Razor;
On `Definiteness in Bulgarian, English, and Russian;
Syntactic Accessibility and Lexical Storage: the Distribution of the Russian Infinitive Form moch' and Its Theoretical Implications;
A Continuum of Lexical Transitivity: Slightly-Transitive Verbs.

Part III: Modeling Grammatical Categories.
Introduction by Carol J. Neidle.
Chapters:
Hierarchies in the Russian Case System: for N-A-G-L-D-I, against N-G-D-A-I-L;
From Jakobson's Cube as Objet d'art to a New Model of the Grammatical Sign;
Substantive Universals and Multi-Level Markedness: Oppositions in Bulgarian and English Verb Morphology;
On Paradigm Geometry (with Katherine L. McCreight);
The Evolution of the Concept of Markedness from the Prague Circle to Generative Grammar.

Part IV: Linguistic Poetics and Narrative Structure.
Introduction by Daniel Rancour-Laferriere.
Chapters:
Tìffi's Poem `The Ship' (Korabl'); Stylistic Use of Affective Suffixes in Leskov;
The Role of Verbal Tense and Aspect in the Narration of `The Tale of Igor's Campaign';
Verbal Aspect, Discourse Saliency, and the So-called `Perfect of Result' in Modern Russian;
The Poetics of Truth in Solzhenitsyn's "Zakhar-Kalita" (Zakhar-The-Pouch).