Recent Advances in the Reconstruction of Common Slavic (1971-1982) 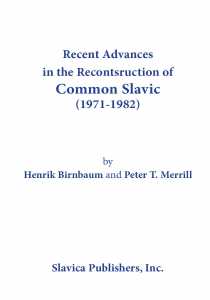 This is a sequel to H. Birnbaum's Common Slavic: Progress and Problems in Its Reconstruction, published in 1975 (and long out of print). The present volume covers relevant scholarship worldwide for the period 1971-1982. The authors discuss and assess recent achievements in the recovery of the preliterate parent language of the Slavs as a whole (and as part of a larger whole), as well as of its major structural components (phonology, morphology, syntax, lexicology), highlighting particularly complex and controversial problems (e.g., accentology, auslaut, verbal derivation, semantics, lexical borrowing). A separate section is devoted to the treatment of specific issues of Common Slavic, such as its emergence from Late Proto-Indo-European; its relationship to Baltic; outer time limits, periodization, and relative chronology of various prehistoric Slavic developments; the dialectal differentiation of Common Slavic; the proto-home (and ethnogenesis) of the Slavs; etc. The bibliography lists close to 700 titles, each marked with one or, usually, several numerical symbols for easy content identification. The key used here corresponds closely to that devised for the previous publication and matches the organization of the table of contents. This, therefore, is a reference and research tool indispensable for any Slavist whose interests go beyond the recorded evolution of the Slavic languages. Its acknowledged usefulness is borne out by the fact that the two works on Common Slavic -- the present one in conjunction with its predecessor -- have been translated into Russian and published in Moscow with a preface by V. A. Dybo.